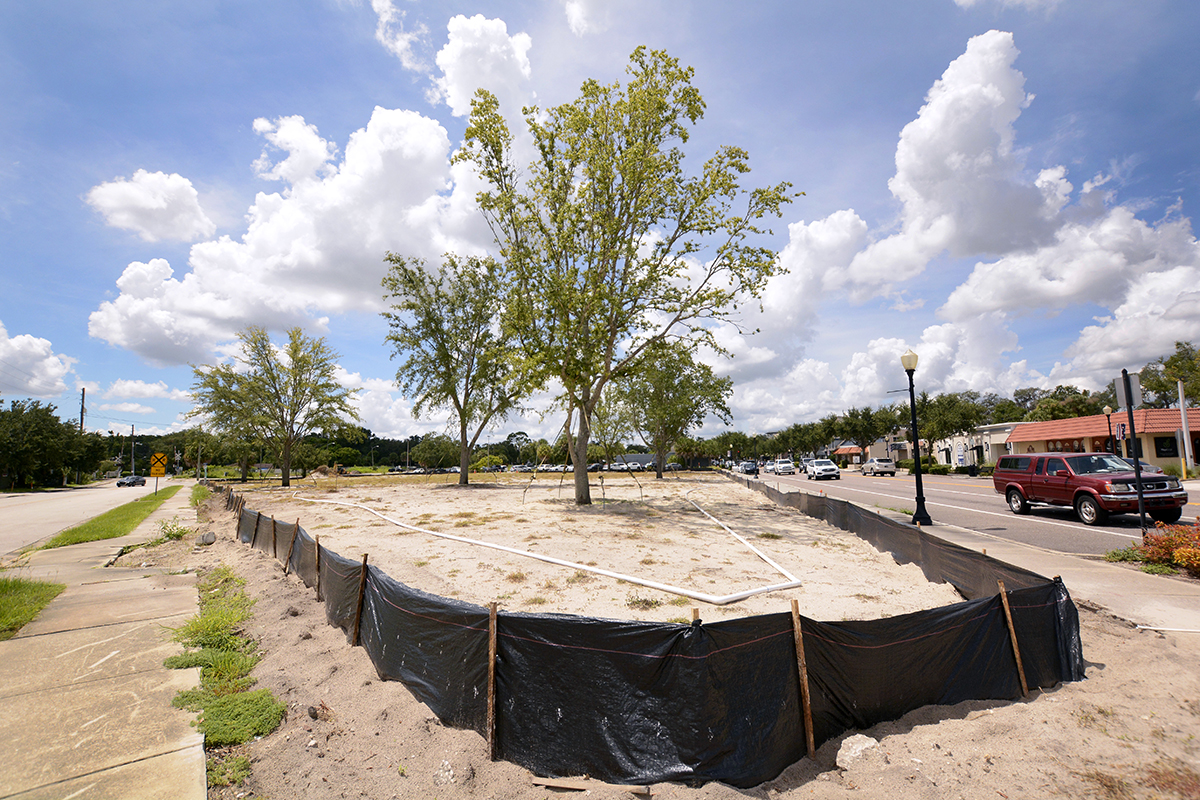 Six months have passed since seven live oak trees were planted at the future site of Progress Point, leaving some residents wondering about the state of Winter Park’s green space project.

The $3.1 million park, designed by ACi Architects and LandDesign, will include pathways, fountains, shaded areas, and space for public programming. The designs were originally considered in the overall concepting of the Orange Avenue Overlay, but commissioners chose to move forward with the park as a separate project.

As previously reported by the32789, plans originally included 40,000 square-feet of retail, restaurant, and commercial space. However, the public and city’s desire for more green space led to the postponement of commercial development. City Manager Randy Knight told the32789 in February that the commercial aspect is not part of the current development phase.

The year began with plenty of activity as work crews leveled land, installed irrigation infrastructure, and planted the live oaks in February. However, the site has not seen much activity since City Commission took part in a March 11 dedication for the new trees that included a ceremonial dirt toss.

Materials delays and price increases throughout the construction industry have impacted the project timeline, and recent additions including public restrooms, additional shade canopies, and walkway modifications are expected to be approved in September.

Here, Parks & Recreation Director Jason Seeley updates the32789 on where the project stands and when progress will resume.

What changes/additions have been made to the Progress Point design?

The design went to City Commission during the July 27 meeting and was approved with some minor changes to the walkway configuration along Palmetto Avenue. An additional $1 million has been budgeted to cover elements such as public restrooms, an upgraded trellis along Orange Avenue, shade structures, lighting, and brick accented walkways. Designs are currently being updated accordingly, and we expect them to be completed by mid-September.

What is the next step in development?

Once we have the completed plan from ACi Architects it will be given one more pass through City Commission, and then we will move toward construction. I would expect the Palmetto Avenue realignment to commence prior to park construction.

How is parking being addressed?

At this time, Progress Point will utilize the surface lot at Palmetto Avenue and existing on-street parking. There is the potential, at some point in the future, for a parking garage to be built where the current surface lot sits, but that is not part of the current scope.

I would not expect to see any major developments on the construction front until at least the first quarter of 2023. My expectation is that design revisions go to the second City Commission meeting in September. The last quarter of the calendar year will focus on getting purchasing and logistics squared away so that we can hopefully start construction in early 2023.