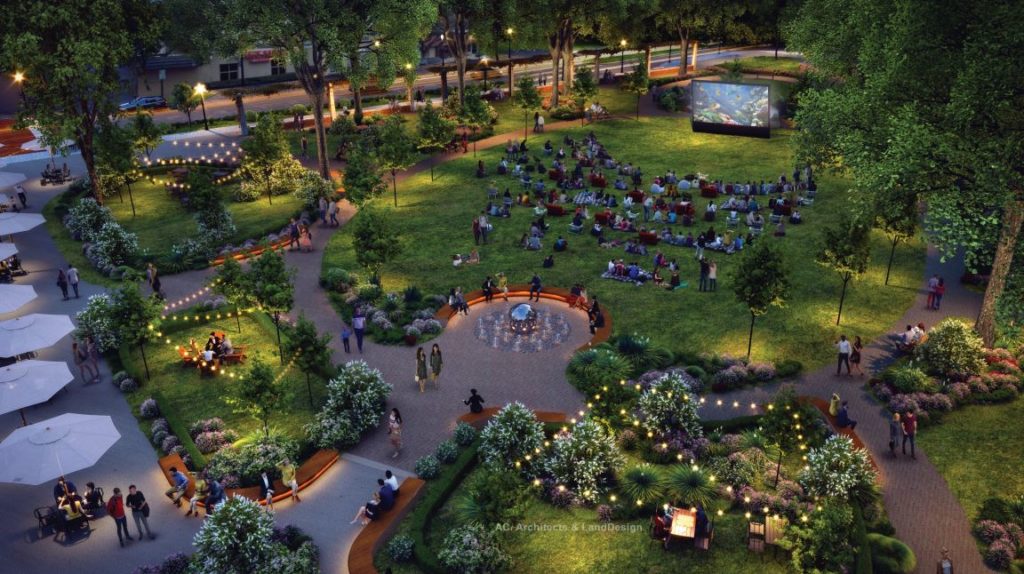 The City of Winter Park has made it a priority this year to utilize public input for the redevelopment of the long-vacant, 3.5-acre property of publicly owned land located at the corner of Orange Avenue and Denning Drive. Progress Point Park will function as a major component in the Orlando Avenue Overlay (OAO) district, which is currently under review by the City of Winter Park.

Put simply, the discussion at hand asks: Should Progress Point Park become a new $3.1 million urban park space development, or should the City allocate the land for more green space in Winter Park?

ACi Architects, the Winter Park-based architect designated for the project, utilized feedback from Winter Park residents collected from a study conducted earlier this year to gain more insight into the community’s desires for the use of the property. The research included a 750-participant charrette and online survey about the design and potential featured attractions for Progress Point.

During a city commission meeting in early August, the architectural group presented its conceptual renderings for the property, which included features like 40,000-square-feet of retail and restaurant commercial space, space for a public park, a brewery, parking garage, pedestrian pathways, a roof-top dining bar, and public programming areas on a 1.5-acre section of the land.

“Interstitial spaces between buildings and property edges can be exciting, dynamic spaces and need to have as much care provided to them as the park itself,” ACi’s report said. “The main courtyard is the “arrival courtyard”, located between the two commercial buildings and the garage. This space will have cars circulating, vehicle pick up, take out standing space and pedestrian arrival.”

Following the presentation, the ball is now in the City’s court to decide whether a request for proposal (RFP) is needed for the plans, or if the construction of the multimillion-dollar project is in the public’s best interest. To proceed with the RFP process, City Commissioners will need to decide whether to approve a phasing plan that considers the time and construction of the park in accordance with the redevelopment.

On August 11, the City discussed elements of the Progress Point Park project and reviewed the ACi RFP guide to better understand the scope of the project, evaluate the creation of an RFP and the size of potential buildings that could be considered for the property. After debating the idea, the City decided to forgo any immediate decisions regarding an RFP and postponed any RFP for commercial development of the park.

“The discussion of Progress Point & potential RFP was held,” the City stated in an email. “The Commission decided not to proceed with an RFP at this time. Staff was asked to bring back a complete park plan.”

According to the City, the RFP would be seeking private or non-profit candidates, and would also need to feature a parking lot plan for small businesses in the area. ACi also reported that the best route to explore private investing opportunities for the project is to sell the commercial portion of the property to the private sector; accordingly, the City could also sell development rights to a potential developer, who would then have the chance to finance the Progress Point Park site.

“This vision was to offer the Orange Avenue gateway corridor a unique place-making and economic development opportunity to cultivate a more vibrant village-scale destination,” ACi stated in its report. “[A private developer] makes the deal size a bit larger and gives the developer some control of the parking which could both open up the financing to more lenders on a national scale.”

Based on the32789’s coverage of a local online petition, other community voices have entered the discussion including a locally-known Instagram account, Winter Park Voter (@wpvoter). Recently, the social account has taken the liberty of posting short clips from public meetings held about Progress Point Park, along with more information about the stance of each city commissioner and Mayor Phil Anderson.

As shared by Winter Park Voter, the stance of city officials reflects the following,

Actively reporting on the project, Winter Park Voter is asking locals to participate in a “100 Email Challenge,” which asks for one hundred email addresses from Winter Park residents who desire a park and a building in Progress Point Park.

Another Winter Park local, Charles Williams, has spent the summer gathering support for his initiative and online petition, which requests that the City of Winter Park use the land at Progress Point for more green space. Since going live in May, the petition has collected more than 500 signatures, and several comments from locals.

On July 12, the Winter Park Land Trust shared its resolution with the City of Winter Park, which states that the nonprofit recommends maximizing the amount of land devoted to green space in the Progress Point parcel and connecting the green space to other city parks through walkways and bikeways.

“Once it’s paved, these limited assets are lost forever,” Williams said. “We ask for your stewardship and protection of this unique City-owned parcel for generations to come.”