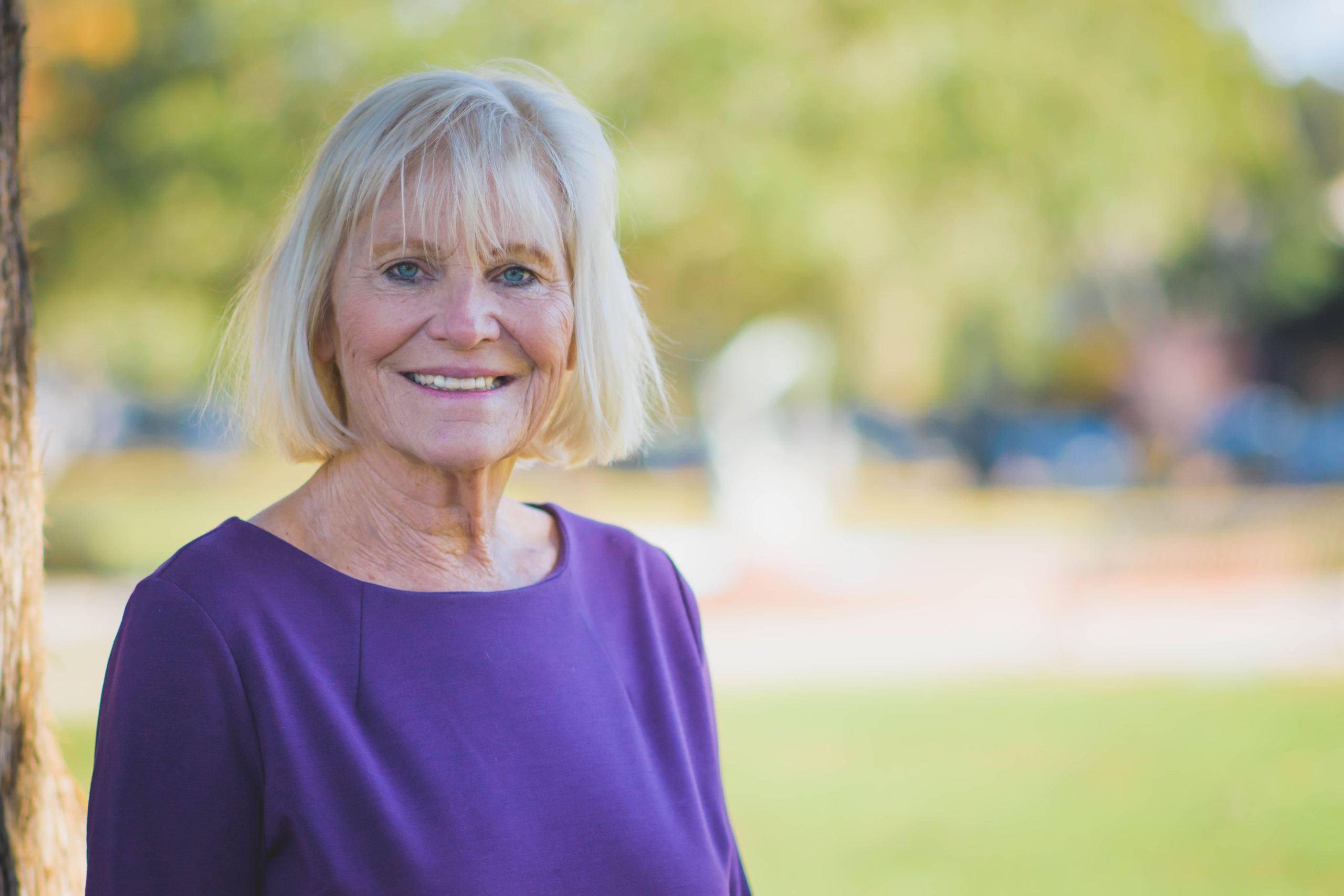 Sarah Sprinkel, Winter Park resident of 49 years, is running for Winter Park Mayor in the 2021 election. Photo by: Abigail Waters

Sarah Sprinkel, Winter Park resident of 49 years, is running for Winter Park Mayor in the 2021 election. Photo by: Abigail Waters
Share This:

Mayoral candidate Sarah Sprinkel came to Winter Park, her husband’s hometown, in 1972. Though from Tennessee, the Nashville native says her roots are right here in Winter Park. Today, nearing five decades in Winter Park, she’s striving to serve as the city’s next mayor.

With Winter Park residents of in mind, we asked Sprinkel (and her opponent, Phil Anderson) a series of questions relating to their plans as potential mayor of Winter Park. Her responses are below, some of which have been edited for brevity and clarity. the32789 thanks both candidates for their time and transparency.

I got hired sight unseen over the telephone by the superintendent of Polk County to come teach kindergarten, so that’s how I got to Florida. Then I met my husband. He was in Polk County for a short period of time, then we came back to his home, Winter Park. He’s been in Winter Park for 66 years and I’ve been here for 49 years. I was born and raised in Tennessee, but my roots are here now.

WHAT PRIOR EXPERIENCES HAVE PREPARED YOU TO SERVE AS MAYOR?

I served as a city commissioner from 2011 to 2020. So I had three terms and in those three terms left the city in the best financial condition it has ever enjoyed. I made sure that our foundation was strong. That comes from working in a school system that’s also a governmental agency and has public funding. You learn a great deal about how the money works when you do governmental relations. I can attribute all of that strength to that training. I have a very good understanding of how the system works and most people don’t – it’s just that simple. Since I’ve been on the commission, we’ve received almost $40 million worth of projects back from Tallahassee, from Washington, and all of that’s about what we’ve been able to go and get, and those are all about relationships.

WHAT DO YOU THINK THE MAYOR’S ROLE IS/SHOULD BE?

The mayor’s role in the city of Winter Park, we are a strong city manager form of government. The mayor’s role is to run the meetings and to sign all the documents. And what the mayor can, should and will do when I’m there is, we will absolutely be the leader. And we’ve had many leaders just like that. Ken Bradley was our mayor and he was our leader. Steve has been an excellent leader and I want to continue that leadership. It always starts with a strong financial base and I know how to do that because I did that while I was there. I brought all the stuff that we did in schools like planning and evaluating, measuring and reporting – I brought all that to our city and they didn’t do that before.

WHAT DO YOU THINK MAKES YOU THE BEST CANDIDATE?

I have a proven record that shows I can do it, I have the desire to do it, and I have the experience that shows what I’ve done in the past works. The very best predictor of future success and future behavior is what you did in the past. I never raised the taxes of the citizens; my opponent raised their taxes in 2008. To me, it’s just one of those things you would never ever do.

WHAT INSPIRED YOU TO RUN FOR MAYOR?

IF ELECTED, WHAT WILL BE YOUR TOP PRIORITIES?

I will first of all put together youth on every single board that we have. They may be ex officio until we make some other changes, but I want to have more representation from a younger population in our community. Our town is getting younger, so we need to have younger representation. And I want to have some task forces that can help us with government.

The first thing I’ll do with my team is have a strategic planning session. We’ll work together to decide what our priorities are and how these priorities fit together. I actually did that when I went on the commission in 2011 and that’s what I attribute to our strong financial position. We all got together and we all agreed this is what we’re going to do and then we went that way.

WHAT ARE YOUR THOUGHTS ON THE ORANGE AVENUE OVERLAY PROJECT?

I was part of the group that appointed someone to the task force and I’ll just remind you that the first Orange Avenue meeting I went to was in 2003. They’ve been looking for three solutions to problems that they’ve had there – parking, safety, and beauty. The Orange Avenue merchants then started paying the tax for those three things to happen and those three things have still not happened. Orange Avenue has four times more accidents than anywhere in Winter Park and I got hit on that road. So, I will tell you that I believe safety is the number one reason to fix Orange Avenue and [I] have always stood on that. The other two things, beauty, obviously. And parking, if you could have developed Orange Avenue with the rules they have in place today, it wouldn’t be the way it is after twenty years of paying for it, so you have to get parking in there.

WHAT ARE YOUR THOUGHTS ON NEW TECHNOLOGY EFFORTS IN THE CITY?

5G is really an interesting one because we don’t get to control that because legislatively all the carriers went with 5G and got all the legislators to say, “Cities, you can’t make rules to keep these out.” So, the cities can make some rules as to how they can be beautified. And in doing so, the legislature basically said, “Cities, you can’t keep these out; you can make some limited rules,” and so we did that while I was on the commission as to where 5G could go.

We just buried our powerlines in Winter Park. The last thing we want is a bunch of poles coming up because the 5G requires lots of poles and lots of spaces. The other really big effort is the undergrounding of the cables that we’ve been doing along with what we’ve been doing with undergrounding all of our powerlines. We just finished the first phase of that and the first phase was to connect all the city properties, so that’s huge.

ANY PROPOSED PLANS FOR THE CONTINUED RESPONSE TO COVID-19?

As Park Avenue goes, the City of Winter Park goes, so we have to do more to get those stores back on Park Avenue. We have 17 storefronts that are empty now and we need to get them back and open and thriving. And if we need some of the $17 million in contingency that we left when I was there, then we need to use it for that because that is a vital part of our city.

WHAT ARE THE MOST PRESSING ISSUES FACING WINTER PARK TODAY, AND IF ELECTED, HOW DO YOU PLAN TO ADDRESS THEM?

What happens the most in Winter Park is people do not want traffic, that’s what they talk about the most. And yet, we’re the highest growth area in the nation when you look at the Central Florida corridor. We have lots of people moving here, we’re not going to stop people from moving into Orlando and into Florida, and Winter Park is the most popular place for so many people to live. We’re in only redevelopment, there’s no place to develop in Winter Park, so you’re only going to have redevelopment. So, what you’ve found is people’s values of their homes have increased greatly. And in doing that we’ll never have to raise taxes because we have a built-in system because the way property values are limited in the 3% that’s allowed by save our homes. We’ll still have enough new money every year to provide the 50% we’ve been providing for police and fire, so we have a good system in place.

WHAT ARE YOUR HOPES FOR THE CITY’S FUTURE?

My hope for the city is for us to be a more united community that does not have factions that we have today that tear people apart. It’s very, very hard for me to watch that because I’ve always [been] a uniter not a divider and that’s what I want to be. I want to be that uniter.

WHAT’S ONE POSITIVE TRAIT YOU ADMIRE ABOUT YOUR OPPONENT?

I’ve always loved Central Park. I love seeing the life there that says, “This is a community.” Kids are running around and playing, people are laying on blankets, it’s a very exciting place to be. I love that it says, “We live here, we play here, we work here.”

IS THERE ANYTHING ELSE YOU WANT VOTERS TO KNOW?