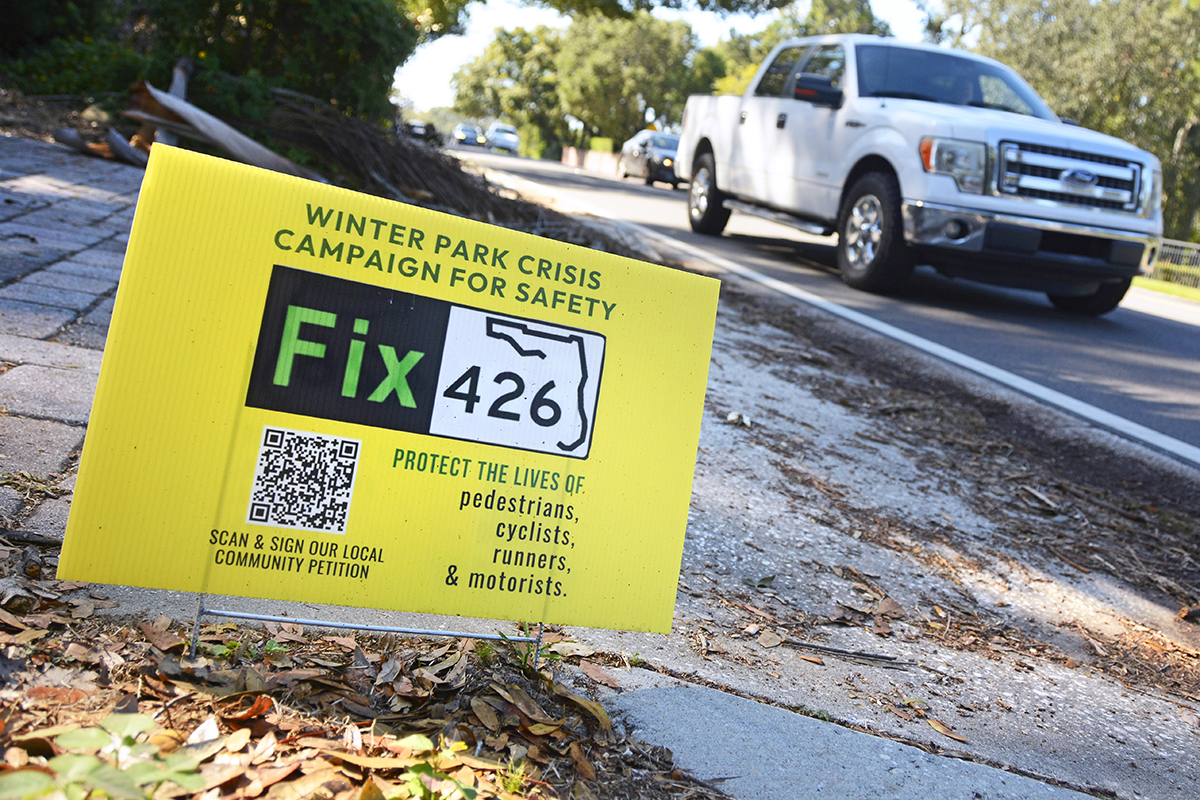 Leah Milan had barely moved into her Winter Park home when a neighborhood dilemma landed, literally, at her doorstep.

“We were four months into living here when a car crashed into our front yard and took out all the hedges,” she said, adding that the police report stated the driver had been speeding and was suspected to be “under the influence.”

Milan, who has lived on Osceola Avenue since January, quickly became aware that what happened on her property was not an isolated incident. Traffic problems on State Road 426 along Osceola, Brewer, and Aloma Avenues are well known by neighbors and city leaders alike.

“In the time I’ve lived here, I actually witnessed at least 10 accidents in our neighborhood,” said Tara Gaffey, who has resided on Brewer Avenue since 2019. “I know that myself and a few of my neighbors were constantly emailing FDOT (Florida Department of Transportation) and (the City of) Winter Park,” she added. “We walk our dogs, kids live here. It’s a residential area and nobody is obeying the speed limit.”

The frequency of traffic incidents and continued communication from residents led the City of Winter Park to call the Brewer’s Curve Neighborhood Meeting on Feb. 10. With FDOT representatives in attendance, residents were invited to share their comments on the problems and possible solutions.

“That group of residents impressed me with their passion. I could see how committed they were,” said David Albertson, who attended the meeting and was motivated to join the community efforts.

Albertson has lived on Trismen Terrace since 1968 and has spent decades watching a steady rise in commuters affect side street access to Osceola Avenue. “When they see you, they accelerate, so you can’t merge into traffic,” he said.

Milan, Gaffey, and Albertson are part of a team of residents working to coordinate a community effort to address traffic safety via the Fix426 Winter Park Road Crisis Campaign. The group is raising awareness of the problem by sharing data collected from the Winter Park Police Department and FDOT, and gathering support for finding a solution with an online petition.

According to the Fix426 website, 322 car accidents have been reported over the past 11 years on a 1.7 mile stretch that includes Osceola, Brewer, and Aloma Avenues. A total of 49 crashes occurred between August 2021 and August 2022 with 11 crashes reported between June and July.

Page 35 of the City of Winter Park’s 2011 Traffic and Transportation Plan included a proposed traffic signal in the vicinity of Trismen Terrace and Henkel Circle. An excerpt regarding the signal states the following:

Winter Park Planning and Transportation Department Director Jeff Briggs told the32789 that the request for the signal did not meet the state’s evaluation criteria.

“While the City is interested in having a traffic light at Trismen Terrace and Henkel Circle (per the 2011 plan), S.R. 426 is a state road and FDOT has total jurisdiction and decision-making power over whether that occurs,” he said. “The State has adopted warrants or justifications that are necessary to meet in order to put in a traffic light. One of those is the volume of cars at the cross streets (Trismen Terrace & Henkel Circle). Previous studies have not satisfied that warrant – as in, not enough traffic.”

A new FDOT traffic and pedestrian safety study, in cooperation with the City of Winter Park, is being planned to address safety as well as volume. FDOT Community Outreach Specialist Tim Freed emailed the32789 with the following statement regarding the study:

“The Florida Department of Transportation (FDOT) is coordinating with the City of Winter Park to begin a future planning study of State Road 426 (Osceola Avenue/Brewer Avenue/Aloma Avenue). The Department is still in the early process of defining the study that will evaluate potential speed management countermeasures as well as other safety improvements along the corridor. Safety for all roadway users is FDOT’s top priority. The Department will engage with locals during the study to ensure we are listening to their needs and achieving the community’s vision for the future. Results of the planning study will help the Department determine the next steps, including costs and schedule.”

Members of Fix426 are hoping for another public meeting with the City and FDOT before the end of the year, but the understanding is that the process is just beginning.

“At this point it’s not about a specific fix,” said Gaffey. “We’re trying to show unity behind the need for a solution. Once we have that, we can start talking about what will work for the community.”