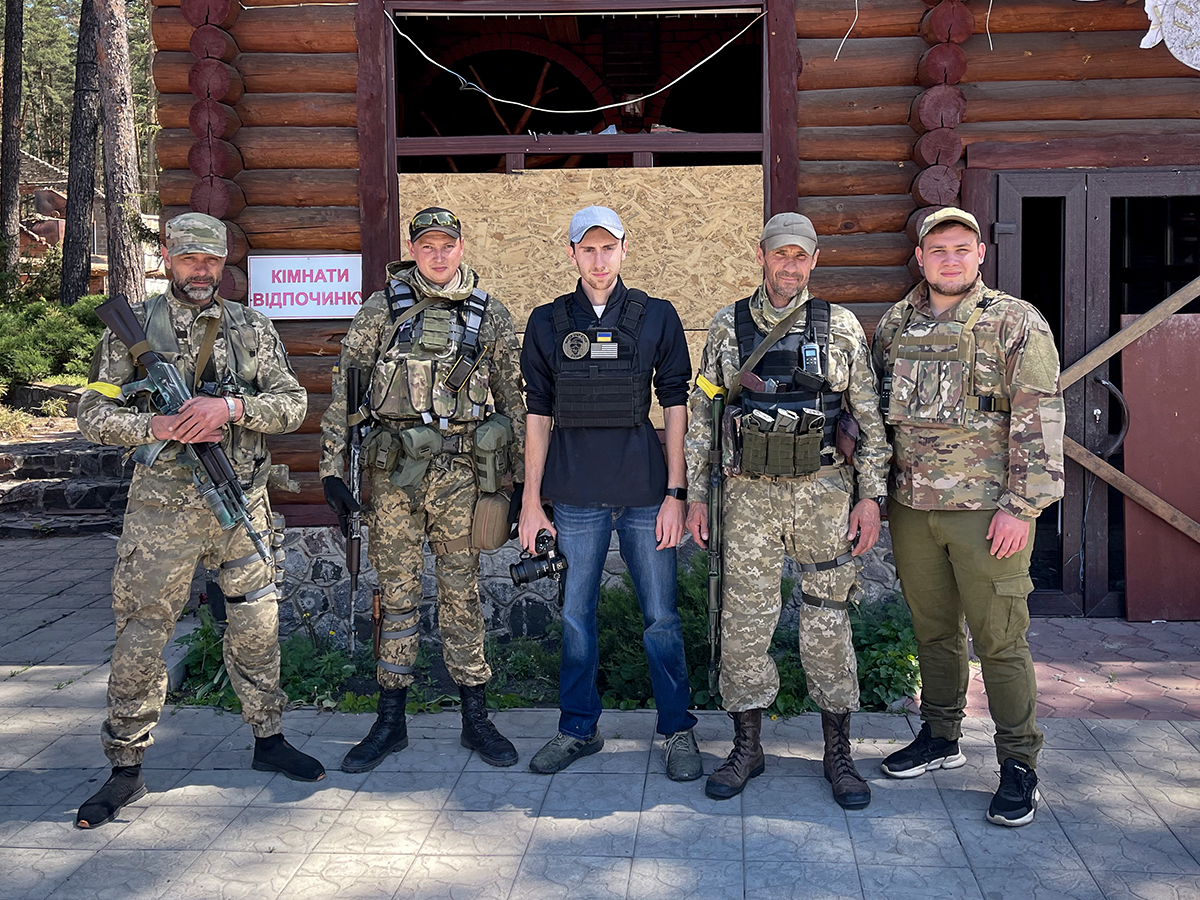 Why this Rollins Student spent his Summer in Ukraine

Benjamin Mack-Jackson is beginning his third year at Rollins College like any other student, but his summer break was far from typical. The international relations major visited the beaches of Normandy and the battlefields of Ukraine as part of a personal mission to preserve the past and document its current relevance.

His journey began at age 13 when a passion for history led to conversations with those who lived it.

“I’ve been interested in historical conflict for many years, and it hit me one day that I could actually talk with World War II veterans instead of reading about them or watching a documentary,” Mack-Jackson said. “I wanted to ask the questions that I had about the war.”

His first interview led to more than 100 conversations, thanks to the contacts he made throughout the tight-knit veteran community. His collection of footage and source material inspired a book, World War II History for Teens, and the creation of the WWII Veterans History Project; a nonprofit with the purpose of educating future generations on the importance of remembering the past.

“The veteran interviews encompass our documentary films,” he said. “We have an archive of artifacts that has been donated by WWII veterans and their families that travel to different events and places. And I do speaking engagements for different groups, organizations, and schools.”

Over the years, Mack-Jackson’s list of contacts and areas of study have extended beyond continental borders. His travels have included sites in Germany, France, Belgium, Denmark, and the Netherlands. However, as Russian aggression in Ukraine intensified, he was compelled to use his contacts to arrange a trip to the border of Poland in March.

“I felt compelled to go over and help the humanitarian efforts in any way that I could,” he said of the spring break venture. “In my free time, I would document where people were coming across the border and areas where refugee camps were set up.”

A second trip was planned even before his return to Winter Park. And at the end of the Rollins College spring semester, Mack-Jackson traveled into Ukraine to document the war and meet with the people surviving the conflict. His first-hand accounts are not unlike those of the veterans he has interviewed.

“When I first arrived in Poland, I took a train to the Ukrainian city of Lviv, and then made my way to Kyiv,which is the capital. There’s a constant threat of aerial attacks from drones, from rockets, from missiles, and there’s always a sense of danger. Ukraine is a country at war and has received considerably less media attention over the past couple of months, but the war is not dying down over there. Yet it became clear that people are trying to resume their everyday lives, even under the threat of war. I spent some time in Sumy Oblast, which is one of the first territories that Russia invaded on February 24. I had a ballistic vest and spent time traveling with a group of soldiers who were fully armed. They had AK-47s and grenade launchers in the trunks of their cars. They were part of a group known as the Sumy Partisans, so they’re not necessarily regular military. They took up arms when the Russians invaded. They are teachers, lawyers, people of every profession who, for the first time, are firing weapons in defense of their country and their cities and villages.”

Mack-Jackson’s work in Ukraine was not only to document the current conflict, but to explain its historical context and how the lessons of the past are critical to the future.

“I believe the rise of Russian nationalism over the past 20 years under Vladimir Putin’s leadership has many similarities to the rise of other fascists and nationalist leaders throughout history,” he said. “I think this invasion is a testament to that; it’s the largest European war since WWII, which is mind-boggling to someone who studies history with the hopes of preventing future wars.”

After immersing himself in the current conflict, Mack-Jackson was again able to pursue historical studies with a July trip to the place where Allied forces landed in Europe.

“I applied for a scholarship to the National WWII Museum’s Normandy Academy and was selected to go as part of a college tour to visit the battlefields,” he said. “Since I already had prior experience touring the battlefields for research and documentary footage, it was cool to go and experience Normandy with other college students and see Normandy in a different way.”

Mack-Jackson’s summer travels encapsulate his mission to use experience and perspective as a tool for education.

“I’m a big advocate for reform in the history curriculum of our education system,” he said. “Making it more interesting, more exciting, and more accessible for students to learn in an interactive way. That’s kind of what I’m aiming for with the different aspects of the nonprofit; to find ways that my generation and future generations can connect to history and learn from history in a meaningful way.”

“It all boils down to, not just capturing history, but doing something with it.”