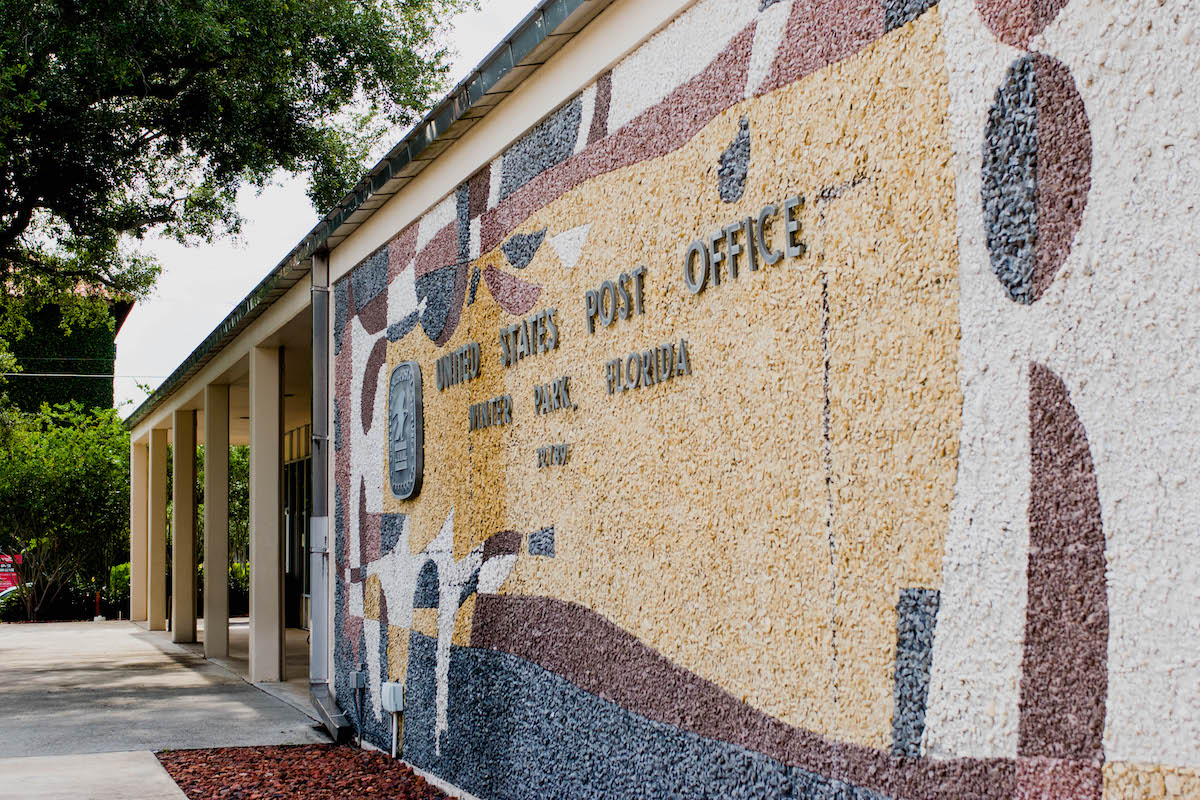 The property that sits adjacent to Central Park has been a hot topic among locals for nearly two decades, drawing strong reactions from City officials and the public. Throughout the years, city leaders have expressed the desire to expand Central Park, however, one factor has captured the attention of the32789 readers: the large, abstract mural that wraps around two sides of the post office building.

Through comments on social media, locals have expressed concerns to the32789 about the possible destruction of what they say is an important part of the city’s history. So, we set out to discover the story behind the mural, the artist who created it, and its historical significance.

Surprisingly, very little information about the mural is actually available to the public.

Designed by architect Joseph Shifalo in 1964-65, the post office building is currently listed as a “contributing resource” for the Downtown Winter Park Historic District’s designation on the National Register of Historic Places, as a classic example of mid-century modern architecture and art. After a weekend of deep-diving into public records, the32789 was able to interview the Tampa-based mural artist, 93-year-old “Joe” Testa-Secca by phone.

It was no accident that Testa-Secca was chosen as the artist to create the mural on the side of the building. At the time, he was becoming a well-known artist across Florida and was recognized locally as a regular at the Winter Park Sidewalk Art Show. Testa-Secca is most well-known for several large mural projects in Tampa and on various college campuses throughout the state.

“There’s one (mural) at the University of South Florida (USF) I did around the same time that is similar,” he said, speaking of the “sister mural” to the one in Winter Park. “It celebrates a meeting place, a place of business. That’s the theme of them.”

In 1964, he won first prize at the Winter Park Sidewalk Art Festival in the “painting (other media)” category, according to the festival’s archives. In 1965, he was awarded Best of Show and received the Edith Tadd Little Medal as the best artist at the festival. In 1964 and ‘65, when the post office was being planned, Testa-Secca was asked to submit designs for a proposed mural, because of his growing popularity in the local art scene and his recent honors at the Winter Park Sidewalk Art Show.

“They had good judges and a lot of people who were seriously involved with art,” Testa-Secca said. “I guess I had been showing there every year for a number of years, and then all of a sudden you start to get noticed.”

Five years earlier, a local tile company agreed to underwrite part of his first public art commission, a mural wall at the Welcome Center at USF in Tampa, and it was precisely the funding needed for Testa-Secca to spend several months in Mexico City to perfect his skills and learn from local artisans.

During his time there, Testa-Secca worked with artisans at the University of Mexico who used various types of stone for large murals. So, when placing his bid for the USPS mural, he proposed a similar medium: painted rock.

Testa-Secca worked with local Central Florida artisans to paint the rocks, then applied, structured, and arranged them to create his overall design. According to the artist, the design for the mural is also inspired from Mexico City, where he developed his technique, learned how to draw full-scale cartoons, and create sections of irregular shapes to avoid the typical gridding that was the standard approach to large-scale ceramic tile murals.

“It’s really a gathering of people,” Testa-Secca said. “If you look at the mural, you can see [that concept through] abstract figures.”

When told his art on the Winter Park Post Office might be demolished to expand green space, Testa-Secca was understandably saddened. However, he explained his belief that the mural itself could be saved if city leaders felt it was important enough.

In Hillsborough County, city officials did just that. According to the artist, engineers preserved Testa-Secca’s mural, “Symbols of Mankind,” after its original home, Robert W. Saunders, Sr. Public Library, was demolished and rebuilt. Contractors cut the mural into five-foot sections and lifted them with a crane into place on the new library building.

From a historical perspective, both the post office’s architecture and mural are classic examples of mid-century modern design. Author, historian, and Orlando resident, Rick Kilby, explained the significance of the style. “Mid-century modern symbolizes hopefulness and advancement into the space age,” Kilby said. “It was the post-war period. America was booming, and we were becoming a world power. The architecture of the time looked forward, rather than to the past.”

Kilby is also aware of the preservation of the library mural. “It’s quite a big deal to cut a mural off a building,” Kilby said. “To [the Hillsborough community], it was important to save it. Because Joe is a Tampa-based artist, I think, maybe they have a greater appreciation for him.”

According to the National Register of Historic Places website, there is no Federal law prohibiting the demolition of a historic landmark. If the post office land is purchased by the City, it will cease to be recognized as federal land.

When asked about potential plans to save the mural if the building itself is demolished, spokesperson for the Winter Park Communications Department, Clarissa Howard, said there have not been any conversations about the mural yet. She reiterated that it is still quite early in the City’s acquisition process for the property.