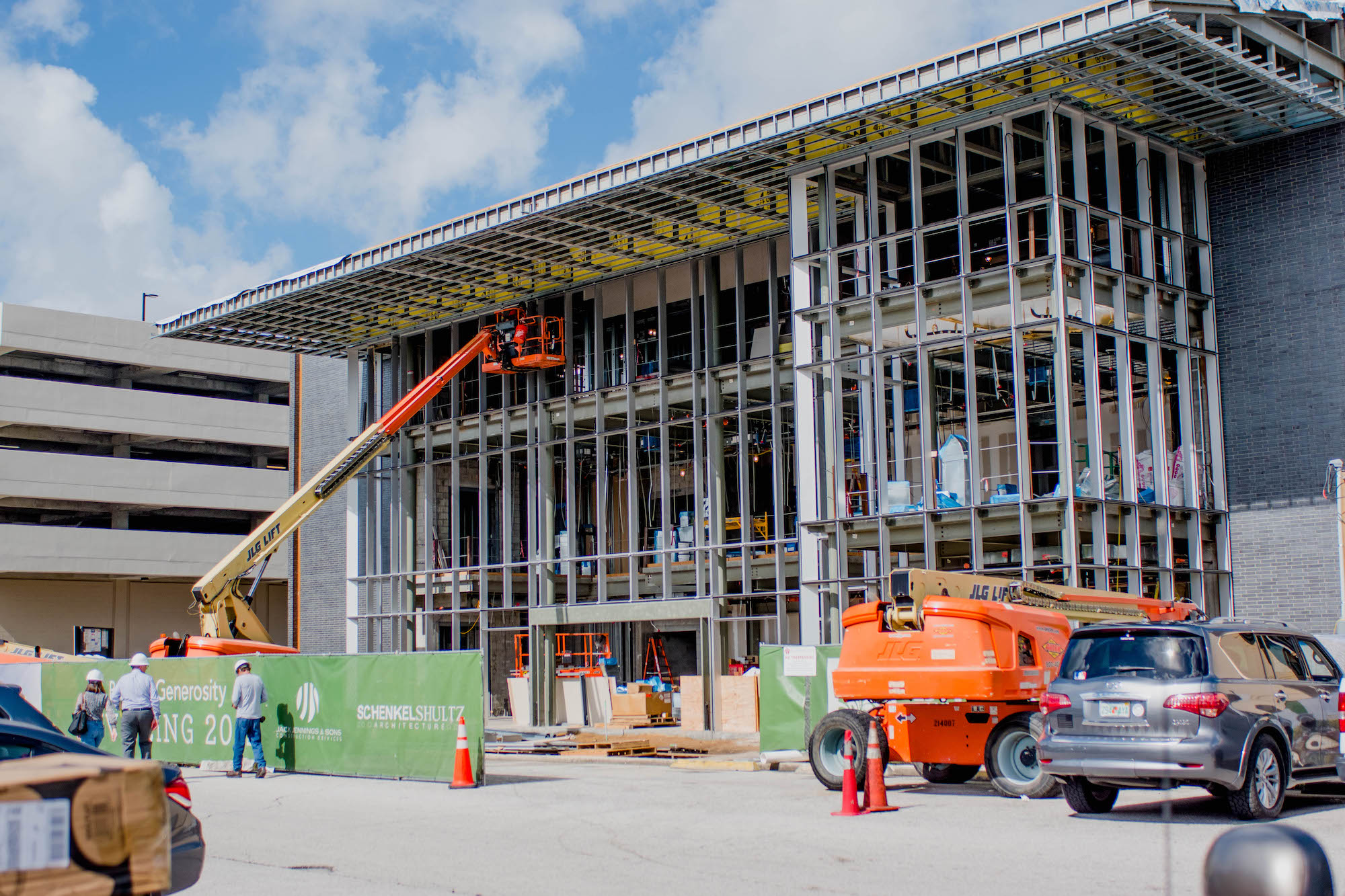 Construction of the new Edyth Bush Charitable Foundation Building is well under way and is set to be complete in November 2021. Photos by: Abigail Waters

Construction of the new Edyth Bush Charitable Foundation Building is well under way and is set to be complete in November 2021. Photos by: Abigail Waters
Share This:

The Edyth Bush Charitable Foundation, a local nonprofit that has provided significant contributions in the Winter Park community and beyond for nearly 50 years, has operated out of an aging building on the corner of E. Welbourne and S. Knowles Avenues for decades. That is about to change. While the facility served the organization well, it has not embodied the Foundation’s full vision to bring people together according to President and CEO David Odahowski.

In a quest to create a new, innovative space for its organization and the community while maintaining its location in the heart of Winter Park, the Foundation kicked off demolition of its former building in August 2020 to make way for its new headquarters: “The Edyth.”

With construction of The Edyth well underway, builders Jack Jennings & Sons recently invited the32789 for a sneak peek at the upcoming facility.

SchenkelShultz Architecture designed the facility to incorporate aspects of the foundation’s history, including founder Edyth Bush’s background. In addition to her efforts as a community activist and philanthropist, Edyth Bush was a dancer, actress, and playwright. SchenkelShultz plans to embody Bush’s love for the arts in her namesake building through design elements that parallel that of a theatre such as the tall glass panes that will make up the face of the three-story structure acting as a transparent curtain that will reveal the beautiful interior.

The Edyth will feature a two-story atrium, tenant suites for other nonprofit organizations, collaborative spaces including a communal countertop on the interior balcony of the second floor, public Wi-Fi and several areas for groups of varying sizes to meet. These gathering spaces include meeting rooms for smaller groups, a high-tech community boardroom, and the large lobby. An outdoor plaza located on the ground floor will also be available for gatherings, events, and guests to enjoy the facility.

Additionally, the first floor will feature a 500-square-foot gallery space with sliding glass panes that can be left open or closed. This space can act either as an art display area or a showcase for nonprofits to exhibit their cause and mission through educational demonstrations, engage with Winter Park locals, and host community donors.

“I like to think of [The Edyth] as a sort of center stage between hospitality, education, art, and Park Avenue commerce,” Odahowski said.

Ekta Desai, a SchenkelShultz Architecture partner and lead architect on this project, shared her design process for The Edyth with the32789. “One of the early things David [Odahowski] said to us at our initial kickoff meeting before we even had any preconceived notions of orientation of the building or anything like that was ‘we want this to be a place that can get the best out of people’ and that was something that really stuck with us,” Desai said. “He was encouraging a space for the community.”

With the Foundation’s vision in mind, Desai and the rest of the project’s team went to work taking their time to make every decision a purposeful one from laying out the building’s entrance to selecting every interior and exterior material. Over a roughly two-year period, the building’s design evolved from three conceptual schemes to the final renderings and blueprints being constructed now.

Designers gave particular attention to selecting the brick for the exterior of the two stairwells on the north and south sides of the building, compared by Desai to wings of a theatre capping either side of the curtain. The team wanted to select a material that would enhance the illuminated stage or interior of the building as it shows through the glass curtain. After extensive exploration, the group landed on an iron spot brick with an almost oil-slick, iridescent finish—one of many choices made to further embody the design of a theatre.

“It was a very iterative process, but necessary I think to be sure we ended up with the quality we wanted,” Desai said. “We always conceived of the building as almost an extension of Edyth Bush’s legacy and her legacy is not only in philanthropy but in her passion for the arts.”

According to Jack Jennings & Sons, The Edyth is now roughly 60 percent finished with a goal to be completed in November 2021. While Foundation staff is expected to occupy the building shortly thereafter in their third-floor offices, the building will likely begin hosting events in the Spring of 2022 with curated days to introduce various community leaders and other groups to the space.

The Edyth Bush Charitable Foundation has made grants of well over $100 million to the Central Florida community and has won numerous national, regional, and local awards for its work. Earlier this year, former Winter Park Mayor Steve Leary awarded the Foundation with the Founders Award for its service to this community.