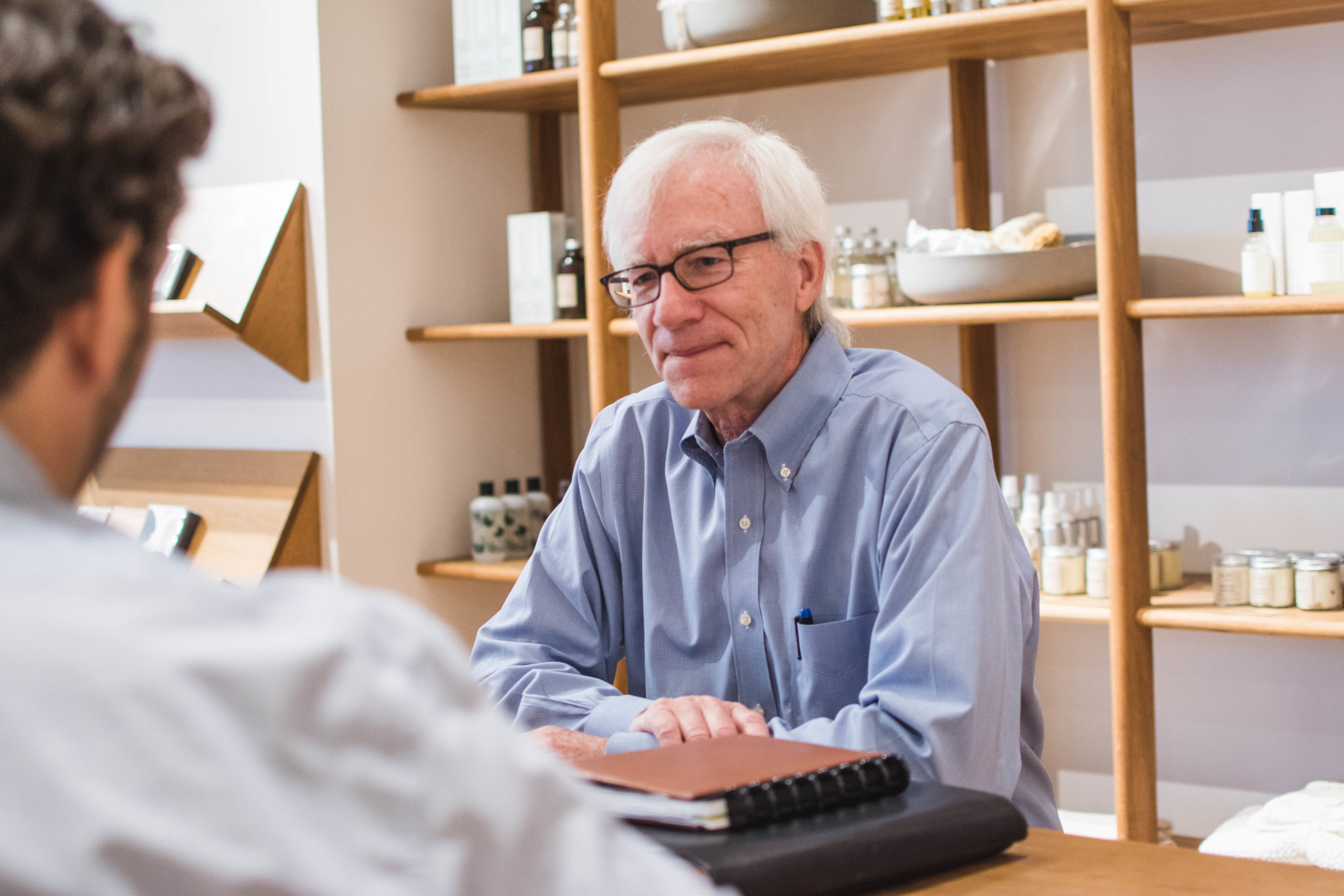 A few months into his first term as Winter park mayor, Phil Anderson discussed his experience with the32789 publisher, Matt Certo. Photo by: Abigail Waters

A few months into his first term as Winter park mayor, Phil Anderson discussed his experience with the32789 publisher, Matt Certo. Photo by: Abigail Waters
Share This:

As he completed his first 100 days as mayor, Phil Anderson sat down with the32789 to discuss progress, on-the-job surprises, and winning the Battle of the Christmas Lights.

Walking into a local coffee shop, it was clear that Phil Anderson was already in the full swing of his first term as Winter Park’s mayor. He frequents all the city’s local coffee shops and enjoys comparing how his drink of choice, a hot latte with whole milk, compares at each location he visits. The secret, he explained, is to “make sure you don’t burn the milk.”

Anderson’s interest in coffee piqued when his son opened a coffee shop in a place that they both love: Montana. His involvement in the shop, as well as his experience with real estate investing and operations, are part of the business acumen that he drew upon as he began navigating the city’s challenges.

“Consensus building in a large organization is a very important skill,” Anderson said. “I think that’s something we’re doing a pretty good job of.” Anderson credits this skill to “a commission that really gets along with one another. They don’t see everything the same way, but they’re willing to have a discussion to get to a consensus,” he said.

The word consensus came up a lot in the conversation, especially when referring to how the current commission is working together with more tenured staff members. The commissioners and tenured staff are “working pretty well together,” according to the mayor. “It’s not a 100% consensus, but when you look at the priorities, I think you have a pretty solid consensus among five folks about what the priorities are,” Anderson said.

Anderson’s consensus-building approach to leadership can be largely attributed to his years of corporate experience. “What I’ve always found in my professional life is… you elevate the concept until you find a general agreement, and then you can start peeling into the details,” Anderson said. “There’s a lot of consistent goals, now taking it down to the details gets a little challenging.”

The first 100 days in office serves as an expected milestone for any elected official and, for the mayor, the significant date isn’t far from his mind. “We’re thinking about it a lot, actually,” he said, referring to many areas of focus that represent progress to him.

“I would say that in the first 90-100 [days], we’ve come a heck of a long way on the Orange Avenue Overlay (OAO),” a project he hopes to bring to approval by the end of the year.

“We’re fixing the Killarney Estates traffic pattern and developing really good consensus around the core of the park in Progress Point,” Anderson said. “I think you’re going to see a groundbreaking on the park at Progress Point within the next six months.”

Anderson was quick to comment on the city’s grant from a recent federal stimulus package. “We’ve had the good fortune of inheriting a significant piece of the American Rescue Act, about $13 million over two years,” he said. Mayor Anderson also emphasized the need to bring energy to the downtown area. “We’re making sure we have a really vital and vibrant core of the city,” Anderson said. “[To] that piece, we’ve allocated some monies.”

He also highlighted Winter Park’s opportunity to shine, quite literally, during the upcoming holiday season. “We’re going to win the Battle of the Lights at Christmas,” he declared, a reference to feedback from citizens and leaders that last year’s lighting display in nearby Winter Garden was more appealing. People asked him if he had been to Winter Garden. “So my wife and I went to Winter Garden,” Anderson said with a smile. “I would say we lost the battle of the Christmas lights last year. As a symbol, we had better win the battle [this year]. I believe the city has already taken steps in that direction. You’ve got to make sure we don’t disappoint when people come to experience Park Avenue.”

The mayor also discussed more overarching, long-term areas of focus when it came to how the city grows and evolves, referring often to the vocabulary that stakeholders use to broach growth and development challenges. He referred to terms like village ambience, small-town feel, history, and heritage to recall the values that surfaced during community discussions in 2016. These phrases, among others, were the prominent parts of a word cloud appearing in a publicly available visioning document that emerged from that process.

“History, heritage, and a small-town feel is what they want to see,” Anderson said. “We’ve come a long way in demonstrating what we think residents meant when they established their values and vision back in 2016 … manifesting first in the OAO. I hope we spread that into some other things going forward.”

As a leader, Anderson is focused on words but places priority on the pictures—a lack of which he feels prevent citizens from grasping what development projects might look like. “[It] probably means creating images,” Anderson said. “There’s not a disconnect on the wording and the words, but no one has a visual vocabulary to point to and say, ‘This is what we need when we say small-town ambience or small-town feel.’”

When asked about the conflicting climate in Winter Park, and other cities like it, Anderson feels that imagery, or lack thereof, is to blame. “What’s polarizing is strong reactions when they see pictures and say ‘Woah, that’s not what I think about when I think small-town ambience and village charm,’” Anderson said. “What creates the opportunity for residents to decide what they want is when they see pictures.”

As he has entered office, Anderson has been welcomed by what he perceives as a very favorable set of operating conditions.

“Ninety to 95% of the city is running really, really, really well,” he said. “Residents of Winter Park don’t have to worry about water quality, potholes, stormwater. They don’t have to worry about police and fire response times. We’ve got a team that keeps the trains running on time. What it does is it gives the citizens and commissioners the opportunity to say, ‘Well, let’s think about moving the train a slightly different direction or adding another train stop.’ But keeping the trains running on time is not Winter Park’s problem.”

When asked about the areas of the city that do need attention, Anderson is clear to note that there’s always room for improvement. “Land use planning is something that the commission can be engaged [with] and [continuously improve] around the edges,” Anderson said. “And commissioners brought it to our attention before I came into office that we needed to increase compensation for our police force. Since that change was made, we’re almost fully staffed at our police department.”

He also mentioned the issue of traffic, something he highlighted in his campaign. “There’s a lot of thought going into traffic calming on the side streets,” he said. “[The focus on traffic] is probably in the top four [priorities], particularly in the western corridor.”

When asked if he was surprised by much during his early days in office, Anderson did not seem caught off guard, perhaps due to his former time as city commissioner from 2008-2011. He did, however, reflect on the time investment that change requires. “It’s not a surprise, but it’s a reminder of how much time it takes to change something,” Anderson said. “We’re trying to accelerate the time it takes to change something by having more and more workshops.”

“Because we do it in the Sunshine,” Anderson continued, as he referenced Florida’s Sunshine Laws, which dictate that all meetings of any state, county, or municipal board or commission must be open to the public. “We’re compensating for that by having a lot of work sessions. What surprises me is how many work sessions we’ve scheduled in the first 100 days. If you’re trying to make substantive change, it takes time to get it done and build consensus in the public forum.”

Anderson said that upcoming work sessions will address topics like sustainability, and power, water, and sewage operations. Anderson also referred to an upcoming July 14th workshop on other city priorities: “We’re going to have a workshop on a whole laundry list of long-term projects.”

One may presume that the purchase of the downtown post office property might be on the table for debate. The project has been a lightning rod, drawing the focus of those on either side of the development debate and prompting six former Winter Park mayors to jointly pen an Orlando Sentinel piece on the dangers of overspending on the property, or whether it should be purchased at all.

Anderson was measured when talking about the commentary. “I thought it was a well-written, interesting piece. But I think it was flawed.” He iterated that some of the flaws are reminiscent of a controversial event in 2004 regarding the four-story, mixed use condominium project, The Carlisle, which was slated for construction but never materialized. “The property wasn’t zoned for condo, and it did become zoned for condo,” he explained.

“That timeframe was what woke me up to Winter Park politics,” Anderson said. “I realized during my campaign [that] 50% of the voter pool voting today has no idea what the controversy was in 2004 to 2006—they’ve either recently moved, or they’ve forgotten.”

“When they were told there could have been a four-story building overlooking the west meadow in the park, they were shocked,” Anderson said. “Thankfully, we had a group of citizens that banded together and got it stopped and reversed.” Anderson intends to maintain vigilant that the most important perceived open space in the city is preserved, he said.

Anderson also made mention of a recent Orlando Sentinel editorial, which addressed the mayors’ concerns. Orlando Sentinel, which endorsed Anderson for the position, encouraged the purchase of the post office property but not to the point of overpaying for the property as the mayoral commentary suggested.

Thankfully, not every subject is amid a heated debate. Anderson enjoyed talking about a topic most everyone agrees upon: The desire for city-wide, fast, reliable, and redundant Internet connectivity (to include backup that activates if the main connection fails).

“I have to thank Commissioner DeCiccio, who brought forth the idea of getting a task force engaged to do that,” Anderson said. “We are now actively looking for the seven members. [The] goal here is to define what the level of service needs to be, and then find the best path.”

Future commission meetings and work sessions can be found on the City of Winter Park website.