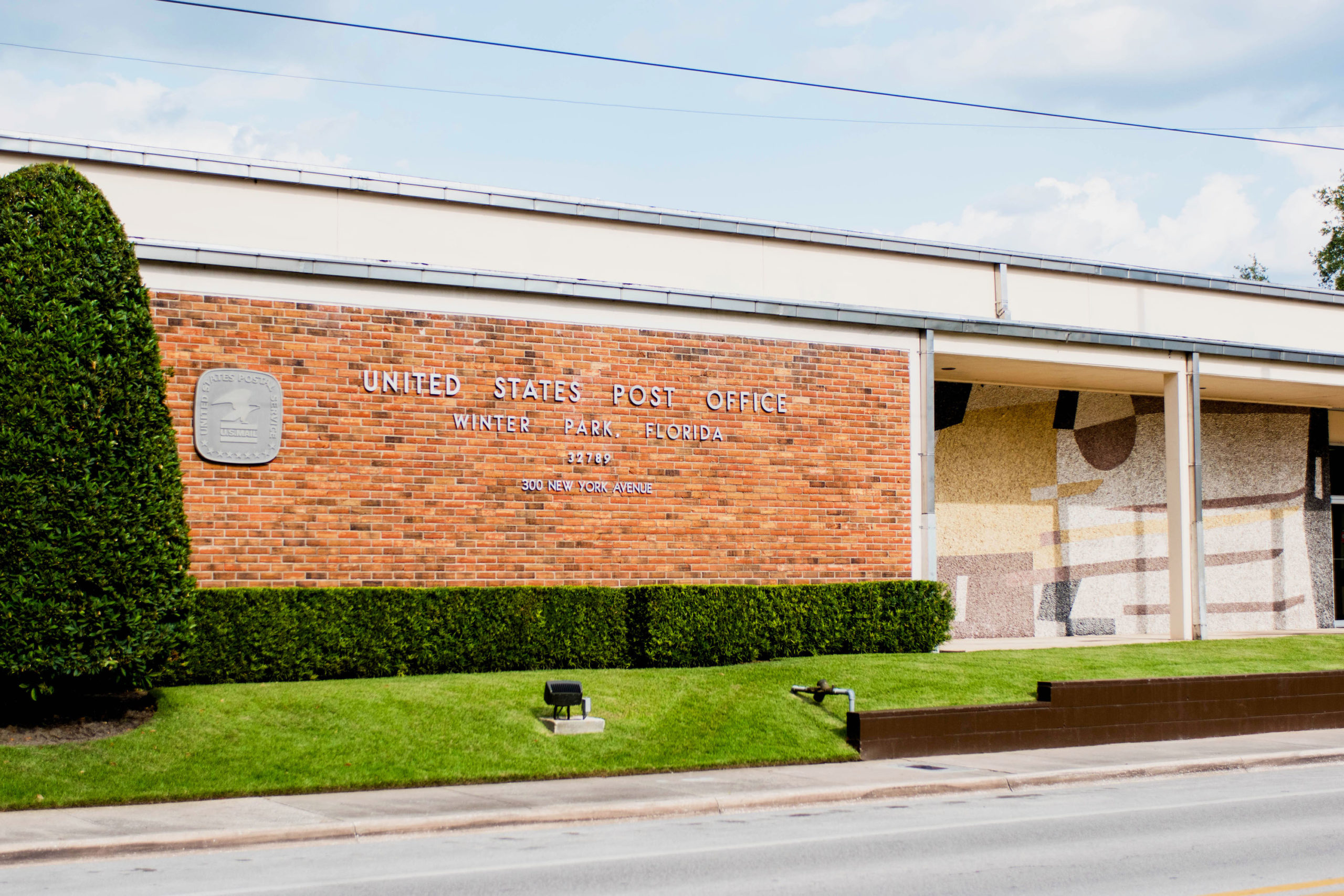 On May 24, the Winter Park City Commission held a work session to discuss the potential purchase of the United States Postal Service property. Photo by: Abigail Waters

On May 24, the Winter Park City Commission held a work session to discuss the potential purchase of the United States Postal Service property. Photo by: Abigail Waters
Share This:

If the circumstances were right, would the consensus of the committee be to buy the property? Winter Park Mayor Phil Anderson posed this question at a City Commission work session held in May to discuss potentially purchasing the United States Postal Service (USPS) facility located in Central Park.

The pre-market agreement between the City and USPS, referred to as a one-for-one trade, says the City would be responsible for not only finding and purchasing a new property for the post office, but also paying for the construction of a consolidated replacement facility. In return, USPS would sell the City its current 2-acre property, which is located at 300 N. New York Ave., for just $1 or $10 only after the structure is completed.

Located in the heart of Winter Park, the USPS building is in a prime location and the acquisition of the property by an outside buyer could have a significant impact on local Winter Park businesses, and the overall preservation of Central Park. In the May work session, City officials discussed possible solutions to prevent this from happening.

USPS has stated that the City will not have priority in the deal should they decide to forgo the initial offer to acquire the property before it goes on the market. USPS also informed the City that it would be maximizing competition between future potential buyers to gain the highest offer for the property when it decides to sell.

The City of Winter Park currently has $7.5 million budgeted for the project from its Community Redevelopment Agency, which would not cover the full cost of the project. The deal, according to Mayor Anderson, would cost the City somewhere between $10-12 million should the City find a relocation site for USPS that meets all terms outlined in the agreement.

During the work session on May 24, the commissioners discussed purchasing a low-cost lot to save more money for the construction of the new USPS facility. According to City Manager Randy Knight, however, the City will need to find land that has a market value equivalent to the 2-acre property currently housing USPS, which is estimated at $4-6 million, or else they will be required to write a check for the difference.

Monetarily, the deal would ultimately benefit the post office, and the City would end up paying more money to acquire the Central Park land than USPS would be paying to relocate. Money, however, is only one factor of concern within the deal.

The threat of an unknown buyer developing the current USPS facility is nothing new to the City of Winter Park. In fact, plans for a building the size of two football fields, the Carlisle, received preliminary approval from a prior city commission in 2005. The Carlisle would have been a four-story, 194,000 square-foot building including 130 condominiums, 515 parking spaces, over 10,000 square feet of office and retail space, and 22,000 square feet for the post office.

Preservation of the Central Park property has been a hot topic and an ongoing conversation between City officials for nearly two decades. “The Carlisle would have cast a shadow over two-thirds of the northern quadrant of Central Park,” Mayor Anderson said. “There was a real, clear, and present danger of something landing on this parcel that the majority of Winter Park residents thought it was an inappropriate use of the land. Ultimately, the residents of Winter Park decided both politically and financially to reject that project and go a different path.”

The impact of the Carlisle project was deep, resulting in division among the public and a costly check written to the developers by the City. “This is a painful part of the City’s history,” Mayor Anderson said. “It was a painful check to write to make it go away, and it was painful in some of the ways it created strains on our relationships. I believe everybody on this panel, and the vast majority of residents do not want to see one-fourth of Central Park become a very large building.”

Today, there is less land included in the deal due to the City’s acquisition of part of the property which was declared park land. According to Vice Mayor Carolyn Cooper, the only solution to eliminating the threat of development in Central Park is owning the property in its entirety. In her argument, Cooper says that the City tried to protect the space without purchasing the land by rezoning the property in 2005, but this would not be a viable solution today. “I want to be very clear that zoning alone will not protect this property,” Vice Mayor Cooper said. “If you want to protect this piece of incredibly valuable property, the only way you can do that is to own it.”

The pool of interested buyers for the USPS property has grown exponentially since a former attempt at purchase negotiations with the City failed in 2015. “When we walked away from this project in 2015, we waited, and now the cost has doubled,” Vice Mayor Cooper said. “So, if not now, then when? I received an email from a Winter Park resident this morning, and I thought it read ‘Can we afford it?’ but her question was, ‘Can we afford not to?’ I think we need to move forward and that the climate is right.”

The growth of interested potential buyers, according to Vice Mayor Cooper, is partially due to the recent expansion of transit systems. “Someone came up with a brilliant idea to use land around their major stops full of high-use, mixed-density developments, and use the proceeds from that to fund operations and management,” Vice Mayor Cooper said. “While SunRail doesn’t own the property now, I think that, politically, if a time came when they were going to dispose of their property… the question is who would be the more likely successful government agency? Would it be a major transport authority providing mass transportation or a city park.”

The cost of the one-for-one trade, however, will be much more than the $10-12 million estimate given earlier in the session by Mayor Anderson, according to City Commissioner Sheila DeCiccio. “I’m not sure that I agree with the analysis that the Central Park property is the most valuable piece of land in this deal,” DeCiccio said. “The property that they may decide that they want to build the new facility on could be much more expensive. When looking at the facts, this project could cost us up to $15 million.”

Winter Park commissioners unanimously agreed that acquiring more green space for the park is ideal, however, DeCiccio believes the cost of the deal outweighs the potential benefits. “Trust me, nobody wants to see more green space acquired for the City more than I do,” DeCiccio said. “If the project gets up to $15 million, is that a price we’re willing to pay for those two acres? I just look at all of the things in our city that the money could be spent [on], and I just have to say that if USPS doesn’t have a willing buyer right now then maybe the best thing to do is to look at ways to be first in line and figure out our funding to have the property if they do decide to sell.”

The threat of development of the USPS Central Park property by another party has been a concern to City officials for almost twenty years. However, the post office does not have a willing buyer right now and DeCiccio believes the purchase would impact locals and businesses. “The other thing I know is that so many residents and businesses want their retail for USPS in the general [Central Park] area,” DeCiccio said. “That’s something that we would have to make sure we get or maintain for the business.”

Watch the city’s work session or visit the website for more information on the agenda item.