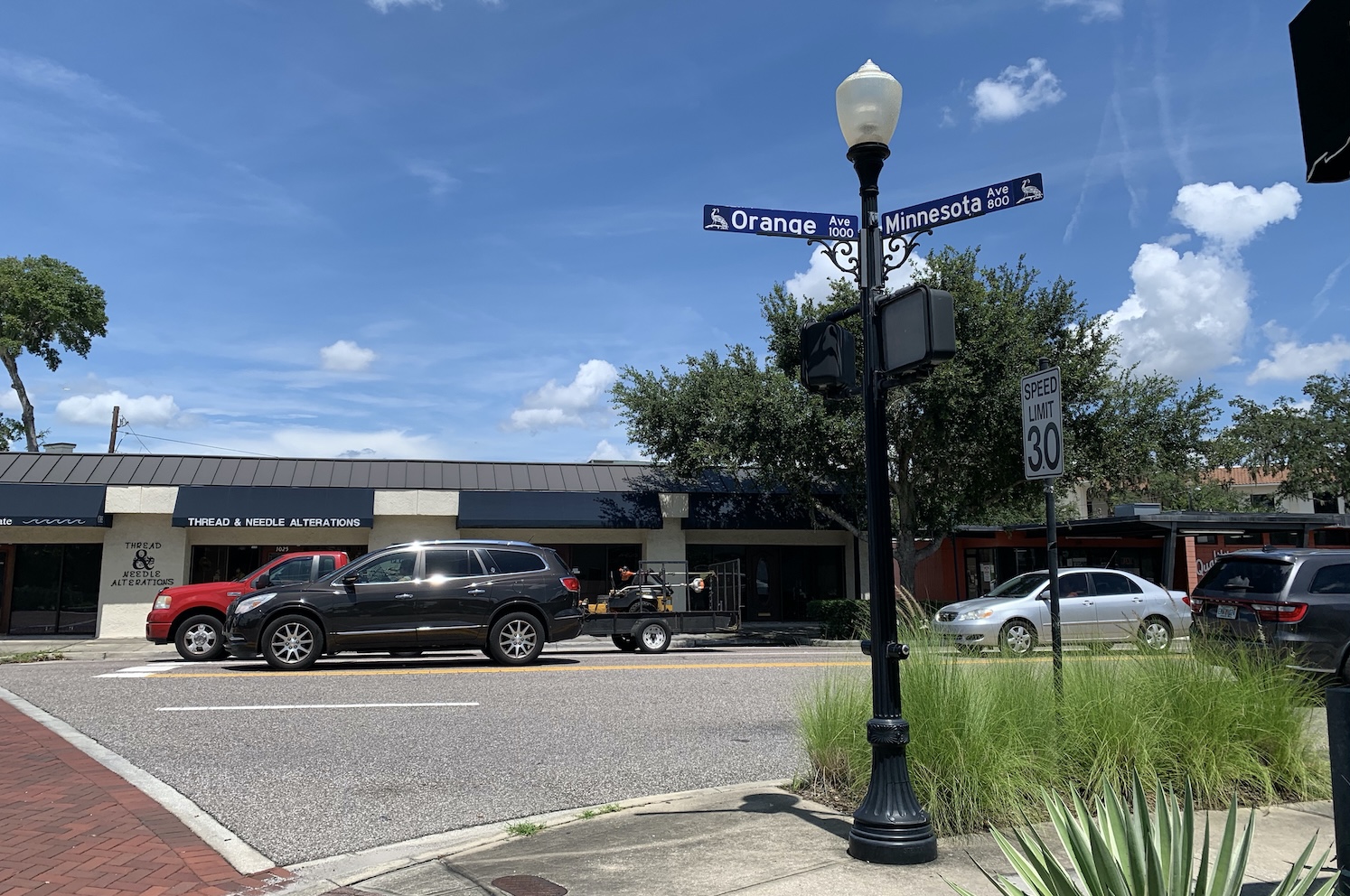 Presenter Mike Woodward, an engineer with the firm Kimley-Horn, stressed that improvements to Orange Avenue and the surrounding streets are separate from the Orange Avenue Overlay (OAO). Design and construction along Orange Avenue can proceed with or without approval of the OAO. First, Woodward discussed findings from several traffic studies, focusing on the current problems along Orange Avenue. He then presented possible solutions that would make the corridor safer for all travelers: drivers, bicyclists, and pedestrians.

“What stands out here is that there are crashes all along the corridor,” Woodward said. “No matter where you are, there are collisions happening in the corridor, and that is somewhat unique to Orange Ave.”

Woodward pointed out that a main reason for these corridor crashes is the lack of a median, which creates more “points of conflict” where vehicles could crash into one another.

Narrow Lanes: Both the travel lanes and the parallel parking lanes along Orange Avenue are narrower than recommended by federal standards. The analyses found 32 percent of crashes were sideswipe or angle crashes, a much high percentage than an average road. Additionally, 12 percent of the time vehicles are hitting a parked car.

High Speed: Woodward said speeding is not an issue during peak travel times when the road is more congested. However, it’s not uncommon for a car to get up to 40 mph in the 30-mph speed limit any time there’s enough space to accelerate. This often results in aggressive lane changes by drivers to maneuver around other vehicles that are either moving slower ahead, perhaps to make a turn.

No Bike Facilities: Narrow sidewalks and a lack of bike lanes make it dangerous for bikers and pedestrians. Bicyclists must ride on the sidewalk, where they are sharing space with pedestrians, and sometimes crash into opening car or storefront doors.

Poor Pedestrian Safety: Many businesses in the corridor are only accessible via the street-facing sidewalk, but there are few safe places for people to cross the street since crosswalks only exist at far apart intersections. Studies show areas with strong pedestrian safety, like Park Avenue, encourage people to walk easily between shops and restaurants leading to increased foot traffic for local businesses. Poor pedestrian safety has the opposite effect.

Intersection at Orange Avenue, Minnesota Avenue, and Denning Drive: Woodward explained that this three-way intersection has issues with limited visibility and is currently overcapacity. The traffic light at this location is inefficient and can take several minutes before turning green from any direction.

Adding a Roundabout: Re-engineering the intersection at Orange Avenue, Minnesota Avenue, and Denning Drive into a roundabout has several advantages according to Woodward. It would considerably reduce the wait time drivers often experience at the existing light and increase the capacity of the intersection.

From a safety standpoint, Woodward said roundabouts have been shown to reduce severe crashes by 80 percent. The reason is that drivers automatically slow down as they approach the roundabout, so it reduces those major, T-bone-style crashes.

Reducing Travel Lanes: The proposed concepts re-imagine Orange Avenue as a two-lane road, as opposed to the current four, with left turn lanes as needed, medians, better parking, and a wide, multi-use path for bicyclists and pedestrians.

“Space is at a premium and we’re not able to provide every type of improvement that everyone wants so we have to make some trade-offs, and we have to decide what’s going to work best in every area,” Woodward said.

Woodward offered research that projects daily traffic will not increase dramatically over the next 20 years, even with the new developments and multi-family housing proposed for the corridor. Two lanes should be sufficient to handle the traffic according to Kimley-Horn’s research. Woodward explained that wider lanes and the addition of medians will help the roadway feel safer for drivers.

Parking: By reducing the number of travel lanes, the addition of angled parking would become an option in some areas. Woodward explained that angled parking is easier for drivers to use and fits more cars in the same amount of space.

Adding Bike Facilities: In addition to a wide, multi-use path along each side of Orange Avenue itself, engineers propose realigning Palmetto Avenue and adding a bike path parallel to the railroad, similar to the area north of Fairbanks Avenue.

The realignment would extend Palmetto past Harmon Avenue to the south, all the way to Orlando Avenue (U.S. 17/92). To the north, Palmetto would intersect with Denning Drive and continue to Minnesota Avenue. This extension would offer an alternative to Orange Avenue for drivers going short distances or bicyclists.

Pedestrian Safety: Pedestrian safety would be addressed in a number of ways, including by adding mid-block crosswalks throughout the corridor. The presenting firm showed an example design where bump-outs were built to shorten the distance across the street. In other places, a new median can act as a refuge, so people only have to focus on crossing one side of the street at a time and are able to stop safely halfway.

Woodward pointed out that the renderings he showed are not actual designs for the street, but concept drawings of what it could look like. The actual design process will proceed following additional analysis and public input.

If you would like to offer input on the presentation, or ask questions, email OrangeAve@CityofWinterPark.com. You can watch the meeting in its entirety on the City of Winter Park’s website.