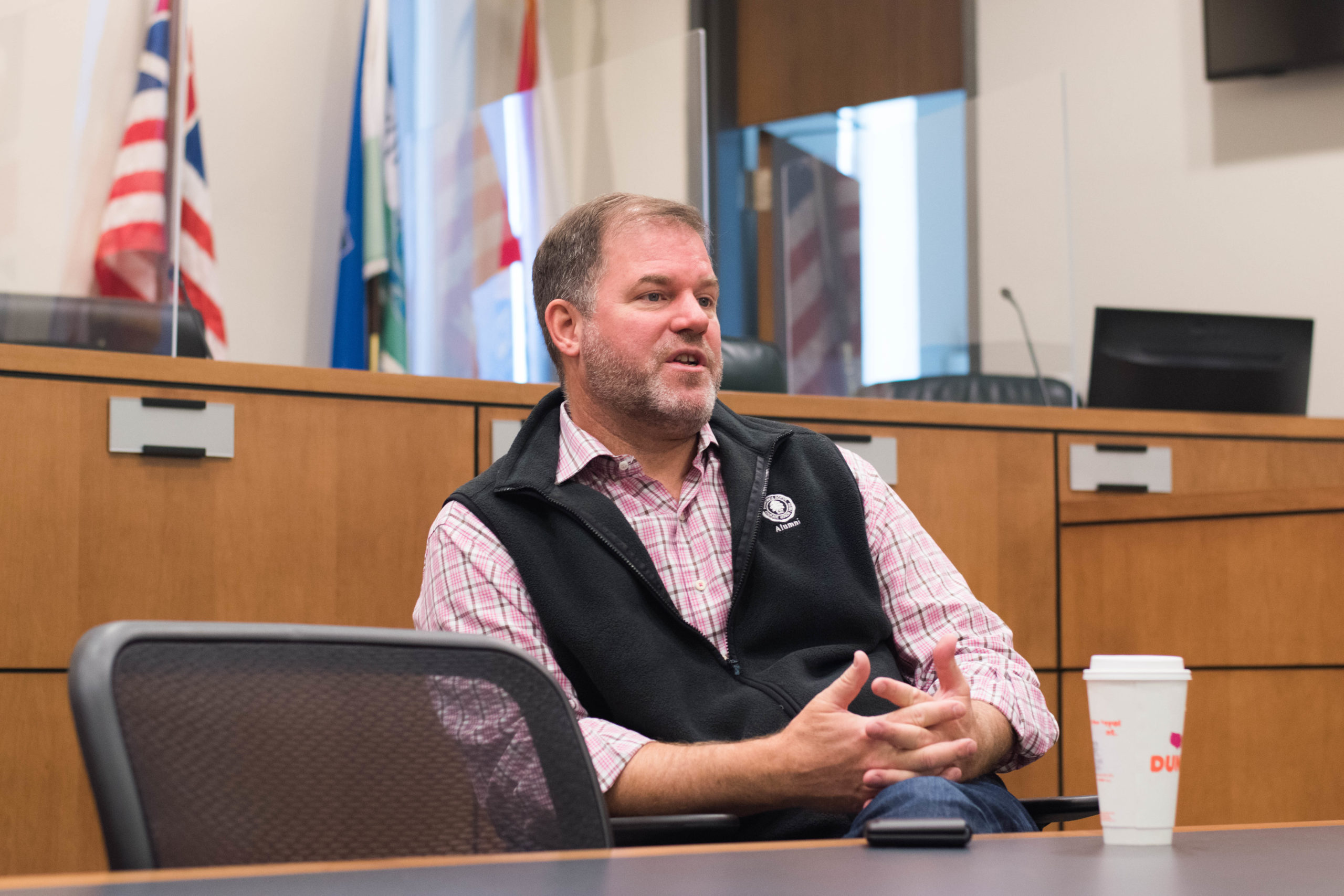 Winter Park Mayor Steve Leary, who was first elected for the position in 2015, discusses his experience in office as his second term comes to an end. Photo by: Abigail Waters

As His Time in Office Ends, Mayor Leary Reflects on His Tenure

Winter Park Mayor Steve Leary, who was first elected for the position in 2015, discusses his experience in office as his second term comes to an end. Photo by: Abigail Waters
Share This:

Just days before the next Mayor of Winter Park is elected, outgoing Mayor Steve Leary spent some time with our Publisher, Matt Certo, to reflect on his time in office. Leary was first elected to Seat 1 of the Winter Park City Commission in 2011, and was elected for his first term as Mayor in 2015.

Responses have been edited for brevity.

HOW DO YOU FEEL AS YOUR TIME IN OFFICE COMES TO A CONCLUSION?

Good. It feels good because in nine years, we did a lot of really good work. Finance, parks, assets we’ve added. The last year has been incredibly challenging for any number of reasons. I think a lot of people will look back and say a lot of good stuff happened.

This past year? Not so much. 2020 is going to be remembered for COVID and backyard chickens.

NOT SO MUCH? WHAT DIDN’T GO SO WELL?

From a city perspective, in my mind, we had the opportunity to really clean up a corridor that’s been sorely lacking. When you look at the Orange Avenue corridor, everything we did was transparent, out in the open. You may not like where we ended up with the library, I’m OK with that. As long as you’re arguing the facts of the project, I’m cool with that. You don’t like the architect? Fine. You don’t like the budget? Fine. Just don’t tell me we’re building it on a sinkhole. Don’t tell me we’re scaring the wildlife out of the area. Don’t tell me the thing’s over budget.

With the library, we had a task force. The first question we asked was, do we need a new library? Even though some on that task force were initially opposed, it was unanimous that we needed a new library after they did their research.

The same thing happened with the Orange Avenue Overlay. We had a completely public process. We had professionals involved. We had neighbors involved, business owners, professionals, including professional land planners. They recognized the challenges of the corridor. People can’t develop property because there’s nowhere to handle water retention or parking under the new codes. The Overlay did a really nice job of recognizing from the Holler Property to Progress Point (which is city-owned) down to Mary Demetree’s properties, the whole idea was: let’s leverage those properties to handle some of the deficiencies of the corridor like water, parking, and traffic. The plan did that. It was a great plan.

We trusted a group of people—professionals—to come with a plan. And they did that. And now to undo it based upon falsehoods? And now to have meetings—not with professionals—but just with people who aren’t happy with the plan? It’s not the way you run government. It’s not how you run an organization. That’s not leadership, that’s not the way you encourage people you work with. It doesn’t set a good tone.

The Henderson Hotel was a huge miss. We talk about revitalizing these corridors. If you look at where the original location of The Ravenous Pig was on Orange Avenue, nothing was happening there until they got situated. And then all of a sudden, you saw things change with the businesses around them—some nice organic growth. The Henderson Hotel had an opportunity to do just that and, again, people sitting in this chamber and elsewhere sharing information that wasn’t necessarily accurate and stirring people up.

I think Commissioner DeCiccio is really trying hard to do the right thing on some of these things. I give her a lot of credit for some of the things she’s bringing forward. I appreciate what she’s trying to do with Fairbanks Avenue and Progress Point. I think she’s trying to do the right thing. For the most part, I think this Board is supposed to be leading us into the future and having good, intelligent discussions, not coming into this room with [their] minds made up or with presentations for or against something. The way we’re proceeding now and operating with minds made up when you walk in this room is not the way we should be doing things.

THE HENDERSON HOTEL PROJECT SEEMED TO BE HIGHLY POLARIZING AND JUST THE LATEST EXAMPLE OF A DIVIDE IN WINTER PARK. NATIONAL POLITICS IS POLARIZING AS WELL.

DO YOU FEEL THAT SAME POLARIZATION IS PRESENT HERE?

I think if you look at the history of Winter Park, these things come in cycles. I think we’re in another down cycle where we have a ‘no-no-no’ if you will, unless it’s done my way. And by the way, that way might not make financial sense. I’ll use Progress Point as an example—people want it done in a certain way. Doesn’t make financial sense, we’re finding out. And if you would have talked to any developer, they would have told you that.

As we look at national politics, the fringes are now defining the middle and it used to be the other way around. Folks are so busy yelling at one another that there’s not good work being done. People say we shouldn’t talk about religion or politics at a young age but maybe we should.

AS YOU LOOK BACK AT YOUR TENURE AS MAYOR, WHAT ARE YOU MOST PROUD OF?

I don’t want to make it about one thing. My kids are my legacy and hopefully I do a good enough job of making sure they become productive members of society and the community. That’s what I’m most proud of.

Everything I worked on here I worked on as a team. I can’t tell you how highly I think of the people at City Hall and their professionalism and how hard they work and how much they care. All the things we’ve accomplished together, I’m really proud of the work we did as teams to do it. I’m proud that we added park land. I’m proud of the fact the kids will have a beautiful new place at the Library and Events Center. The golf course is something that I’m really proud of. I’m proud of the money we pulled back from Tallahassee—close to $30 million that didn’t come out of our general budget or the CRA.

One little thing—I’m really proud that every Christmas I got to walk with every living former mayor who wanted to—to show community.

IS THERE ANYTHING ABOUT THIS JOB THAT REALLY SURPRISED YOU?

That’s a great question. What surprised me, on the negative side, is how few people know what’s really going on—at every level. There are very few people that know how this works and how it’s supposed to work.

On the positive side, I can’t tell you how great people are and how many great people are willing to help. I’ll give you one example: Rollins College. They stepped up and paid $500,000 for the turf at Showalter Field. They didn’t need to. They fronted this money, not because they wanted anything out of it, they did it because they’re a good community partner. They committed to it and it was fantastic.

The Library and Events Center. When we went to [Orange County] Mayor Jerry Demings and asked for $6 million, they showed great leadership. And so did [Orlando] Mayor Buddy Dyer. When we partner with other communities—like Ocoee or Eatonville, we can do great things. And we don’t talk negatively about one another. Some of the comments that come off of this dais about neighboring communities are very disappointing and distasteful.

IN THIS ROLE, WERE THERE THINGS THAT KEPT YOU UP AT NIGHT?

The tragedy with the young man Roger Trindade that lost his life on Park Avenue. That still makes me tear up. As a parent, I can’t imagine.

The other issues at times were impending disasters—hurricanes. When it comes to hurricanes, you should be fearful during the prep stage. When it gets here, you shouldn’t worry because you’ve prepped properly. I’m surrounded by good people. If I’ve been successful, it’s because I’m surrounded by good people. My aim is always to turn them loose and to let them do their jobs.

IS THERE ANYTHING YOU WOULD DO DIFFERENTLY IF YOU HAD THE CHANCE?

I’m disappointed that we didn’t come out stronger on the Library and Events Center. It ended up costing over $1 million in legal fees and construction delays. I’m not sure I had the support of the commission on that, but I think we should have pushed harder and faster. We could be enjoying it right now.

WHAT WOULD BE YOUR ADVICE TO THE NEXT MAYOR?

Just keep your ears open, be fair, and be judicious. Even if there are people that I strongly disagree with, I’ve always tried to be respectful toward them—even if people are critical of me. That’s the job of the Mayor. To the next Mayor, take a deep breath, stand back, and remember nothing is as small or as big as you think—in the moment. Work with people you disagree with and let staff do their jobs.

WHAT’S NEXT FOR YOU IN POLITICS?

I did this for my kids. I stepped up when my kids were 5 to help make a better future for them. I don’t have that same passion on the State level. My kids are now 15, some very formative years for them, and my work is really busy. I never say never, but I need some time right now.

Don’t believe what you read, with the exception of the32789 (laughing). You’re not an expert because you read something on Facebook. We should trust the staff and what they say. Our staff and the City Manager are amazing. It’s crazy what they have to put up with to do their jobs. I’m not sure I could do what they do.