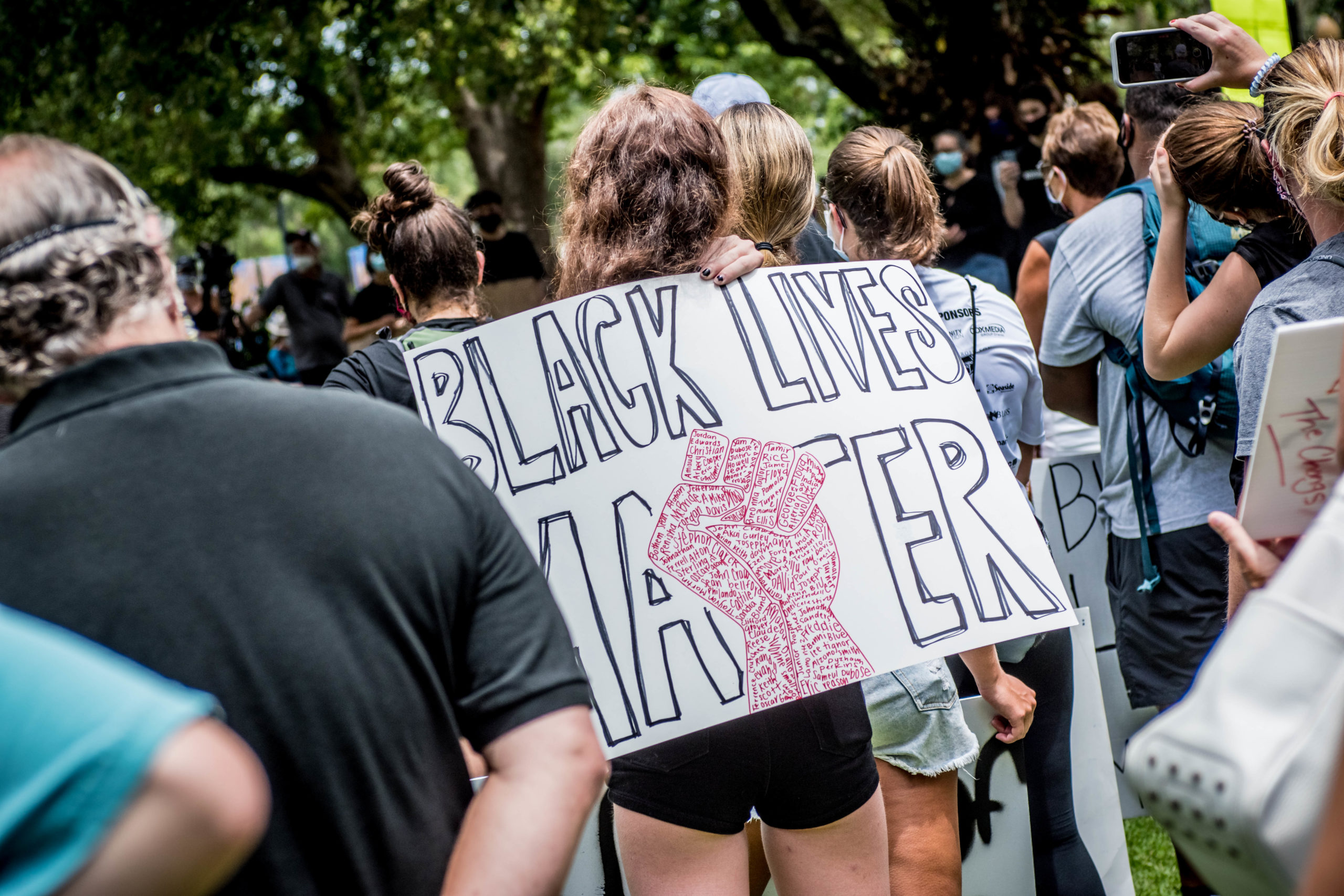 Protestors gathered with signs in Central Park and other areas of downtown Winter Park throughout the weekend. Photo by: Abigail Waters

Protestors gathered with signs in Central Park and other areas of downtown Winter Park throughout the weekend. Photo by: Abigail Waters
Share This:

On Friday, June 5, the first Black Lives Matter protest took place in downtown Winter Park. The gatherings followed the death of George Floyd several days earlier and protests in parts of Orlando along with many others nationwide. Demonstrations continued into the weekend in Winter Park.

While Friday’s protest, planned by first-time organizer Adrian Bouchout, remained peaceful, gatherings on Saturday and Sunday had a greater intensity. According to Winter Park Police Lieutenant Edwin Santos, protestors were “more hostile” with officers on duty.

Sunday’s protest was coordinated by the Orlando Dream Defenders SquaDD, one of many chapters of the larger, Florida-based non-profit organization, The Dream Defenders. The group identifies as abolitionists, feminists, socialists, and internationalists advocating for the dismantlement of policing and prison systems and achieving solidarity for oppressed groups everywhere, particularly for people of color.

Mari, the Orlando Dream Defenders SquaDD Lead, who asked that her last name be omitted, explained that after holding multiple protests mainly in downtown Orlando, the group wanted to expand its reach to more affluent, predominantly white communities.

“Our messaging is that we are going to be really honest… and as a white person I want to make white people uncomfortable,” Mari said. “They need to use their privilege, whatever that is, money, power, they need to use it to help black folks get justice. They need racial justice, they need equality. Black lives matter, this isn’t something [white people] can pretend doesn’t happen just because it doesn’t happen to them.”

After gathering in Central Park at around 10:30 a.m. on Sunday and hearing from speakers, the protestors disbanded to march down Park Avenue and spread to spots on Fairbanks Avenue, Orlando Avenue and other locations where they stationed themselves and sat and walked in the street. Mari reported there were minor interactions between protesters and bystanders, but that she did not witness any escalation in those situations. She also noted the police stood back and allowed them to continue in their demonstration without conflict.

Santos reported protestors were not interested in police assistance and that there was an attempt by the group to “try to get a reaction from [the] officers” and nearby civilians through “screaming at citizens” and “insulting them.”

Mari agreed that the tone of the protest conducted on Sunday may have been more hostile than protests on previous days. She explained that was intended to get the attention of bystanders and encourage action from “apathetic” nonparticipants by causing disruption and being “upfront” and “blunt.” Literature on how to support the movement and flyers with action items, such as donating to bail funds, were distributed and placed on car windshields by protestors.

The Winter Park Police Department expects more protests, and both Bouchout and Mari confirmed they plan to organize more gatherings in the area. “We agree with the protests,” Santos said. “We don’t condone the behavior [of the Minneapolis officers captured on video]. Those officers stopped being police officers when they did that to Mr. Floyd.”