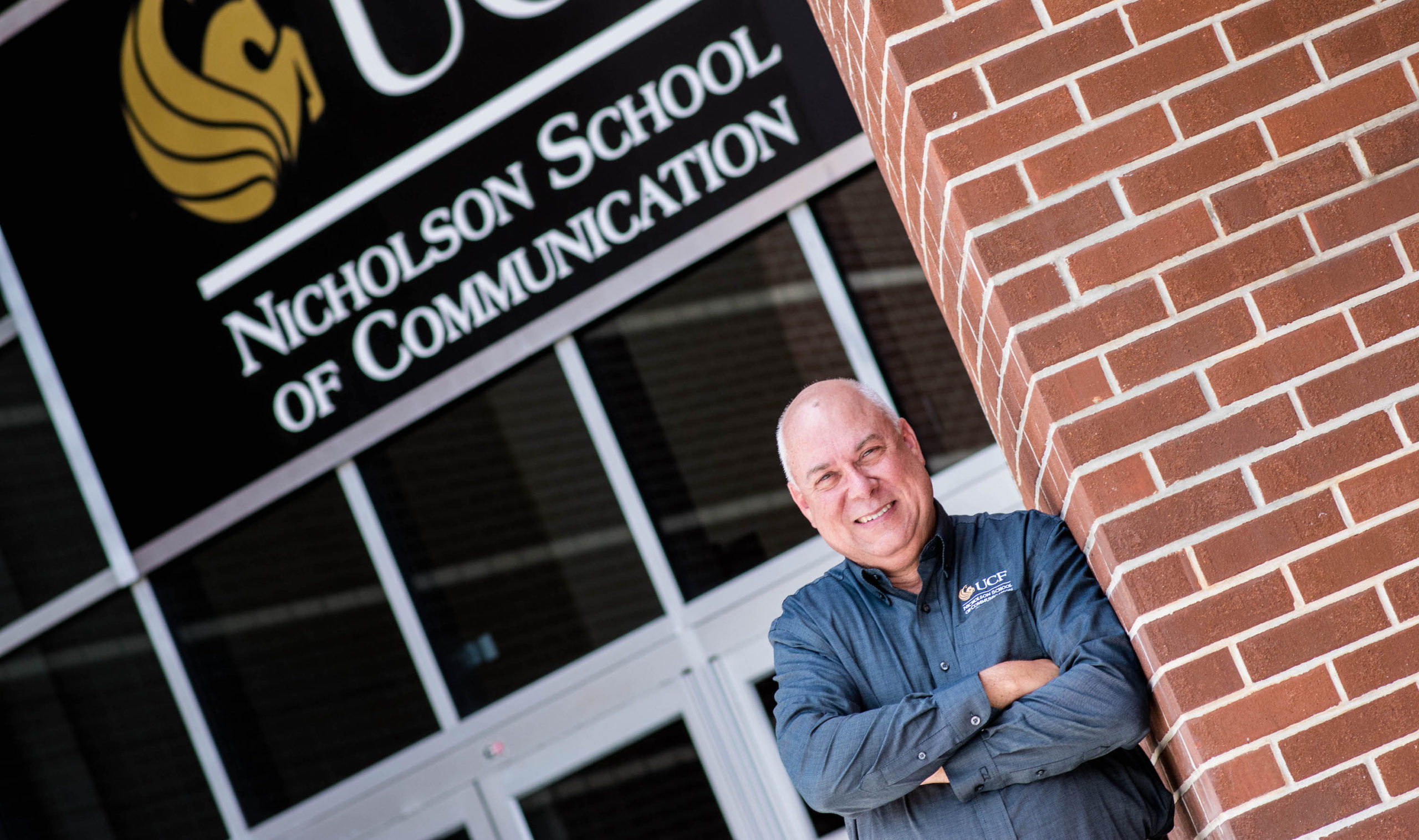 Rick Brunson photographed in front of the UCF Nicholson School of Communication and Media. Photo by: Abigail Waters

Rick Brunson photographed in front of the UCF Nicholson School of Communication and Media. Photo by: Abigail Waters
Share This:

A team from UCF’s Nicholson School of Communication and Media recently launched WinterParkSunshine.org, a tool for citizens to access government information such as city commission meeting minutes, voter data, campaign contributions and more.

The free tool, named after Florida’s Sunshine Law for open government, is funded by a grant from Winter Park philanthropists and residents Glen and Rosemary Salow. The Salows were unsatisfied with the diminished quantity of media coverage the city was receiving, which motivated them to approach the UCF Nicholson School of Communication and Media. The grant’s goal is to fund a solution to remedy the lack of government news coverage in the city of Winter Park. The two-year, $125,000 grant began July 1, 2019 and will continue to support the project until July 1, 2021.

WinterParkSunshine.org compiles, curates and indexes available public data, giving residents a one-stop-shop to acquire information on the activities of their municipal government. The site currently offers information on voter rolls and voter makeup, campaign contributions, actions and votes taken by the city commission, and meeting minutes from a variety of city commission meetings. The site also has a “COVID-19 updates” section that compiles all pandemic-related updates from the city.

The project was launched in March of this year and is run by Rick Brunson, an associate instructor of journalism at the UCF Nicholson School of Communication and Media. Brunson’s team is made up of two graduate research assistants, Lindsay Manganiello and Raby Tall, and will also include an undergraduate journalism intern this summer.

Since launching last July, Brunson has built the program from the ground up, first identifying and interviewing graduate students to be involved in the project and assembling a team, then creating the infrastructure for the data curation, developing the website, and building an audience for the site.

Brunson sees the connection to the college as a strong point of the project, saying “because it’s attached to an institution of higher learning, it has all kinds of possibilities and potential for being a lab for learning … for serving the residents of Winter Park.”

Because of the heavy involvement with gathering, analyzing, indexing and curating data, the project has a profound impact on the students involved, giving them a distinct advantage as they enter a tight job market. “Data right now is the coin of the realm; it’s how any of us understand the world,” said Brunson. “Being involved with data … that is a marketable skill for anybody who is involved in this project.”

By the end of the summer, Brunson plans to add a searchable salary database to the site, which will include the salary of every person employed by the City of Winter Park. He also plans to create a database that will list every public works project in the city, along with its costs and status.

Brunson’s team regularly gathers data from City Clerk Rene Cranis and has not run into any issues getting the information it needs. “Sometimes we have to ask for things in a different format, and so far, [Rene] has been cooperative with giving us what we ask for,” said Brunson. Although much of the data that WinterParkSunshine.org curates is already public record, Brunson expects he will have to dig a bit deeper to gather information for the salary database he is planning for the fall. “There’s data that we’re going to have to request from the city that isn’t readily available online. I anticipate that they will cooperate with us as they have been.”

The project has received positive feedback so far. According to Brunson, The First Amendment Foundation recently reached out to the project to commend the effort. The initiative has also highlighted the passion that the people of Winter Park have for their community. “We did an update last week on one of the data sets, and we had a mistake. It was just a data entry mistake,” Brunson recalls. “[Our] email lit up. People called us out on it. That just tells you the passion of the people of Winter Park. I hated the mistake, but I loved that the people were paying attention.”

In the second year of the project, Winter Park Sunshine plans to host a town hall event for the residents of Winter Park to meet and talk about important city issues. No date or location is currently set for the town hall. There are also plans for a “news” tab on the website that will compile Winter Park headlines from local news organizations. Additionally, Brunson will be launching a podcast on the site this fall. Produced in conjunction with a broadcast journalism class that he teaches at UCF, the weekly podcast will feature interviews with Winter Park city officials and leaders. The students in the class will produce the podcast and upload it to the site.

Ultimately, Brunson hopes to expand the project to other small towns around Central Florida to shine a light on local government activity by giving citizens easy access to collective data that would otherwise be cumbersome to access.