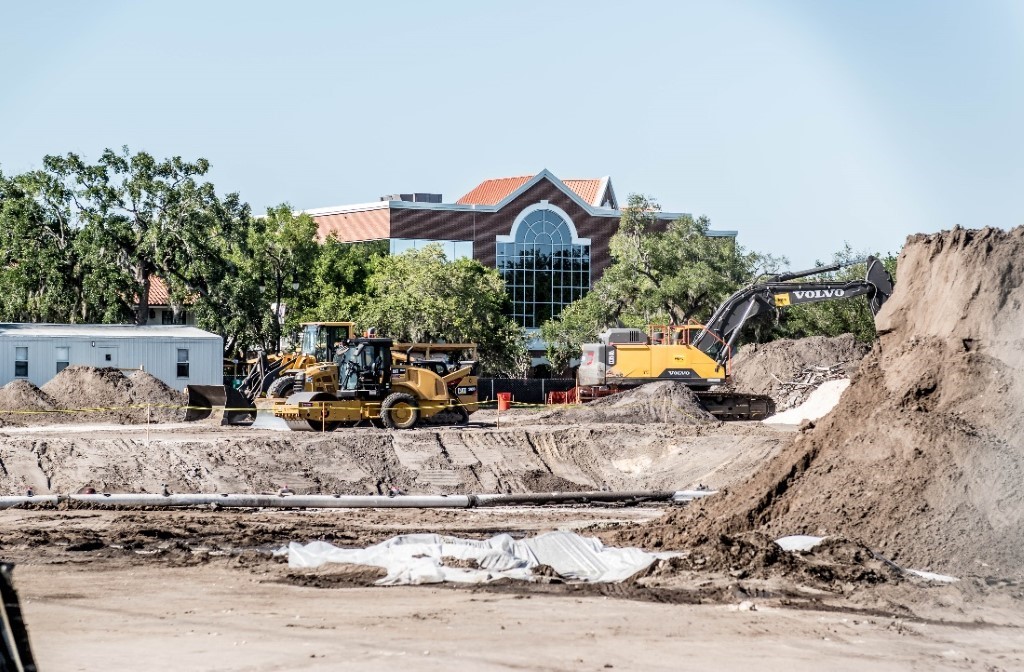 Commission Presses on With Library Project

In a special work session and official meeting of the Winter Park City Commission on Wednesday, May 13, leaders voted to continue construction of the new library and events center by a margin of three to two. The project, wrought with controversy and diverging opinions, hung in the balance leading into the six-and-a-half-hour meeting where citizen comments were heard late into the evening.

As various proposals were made by commissioners regarding the future of the library and events center, the body ultimately voted to proceed with construction while investigating some potential changes that are minor enough to allow construction to proceed. Commissioners expressed interest in reviewing potential design and construction issues including synthetic turf, solar panels, and basement drainage.

The special meeting was proposed during a regular commission meeting, which occurred just two days prior. At that time Commissioner Marty Sullivan proposed to the group an action which he described as “intense.” Sullivan advocated for stopping work on the library project for a period of 90 days “with the purpose of evaluating the financial impact” related to continued construction, delaying the project, or other alternatives. Wishing to stop work on Monday instead of waiting for Wednesday evening for a special meeting, Sullivan warned, “If we have to wait until Wednesday, there will be a lot of concrete in the ground already.” Site construction is just underway.

Commissioner Todd Weaver also expressed misgivings during Monday’s meeting, stating, “We want to provide citizens the best confidence we can and right now I’m not confident.” Weaver also clarified on Monday that cancelling the project was not his aim: “My goal is not to terminate the project.”

Winter Park City Manager Randy Knight warned, “There are a lot of unknowns for stopping a project like this.” Costs for pausing the project were estimated at approximately $160,000 per month with other costs like legal fees not fully known.

Wednesday’s special meeting was filled with a thorough examination of project details by the commission. Pages of questions were submitted to project professionals and staff who answered them in the virtual presence of commissioners, city staff, and citizens listening in on the call.

Discussion covered many topics in extensive detail including pilings, soil compaction, de-mucking, and sinkhole risk. Concern about the temperature of an interior concrete bench in the afternoon sunlight during warmer months of the year was also a topic of discussion.

Commissioner Weaver described being “not comfortable” with some aspects of the project, including the building’s foundation stability: “Something’s gotta give,” he expressed, when sharing his concern.

As discussion came to a close after over three hours of answering questions, Winter Park Mayor Steve Leary encouraged commissioners to move the project forward asking, “Why would we even consider delaying or starting from scratch?”

Sullivan signaled his opposition to continuing: “There are serious shortcomings on many fronts.” In a prepared statement, Commissioner Weaver called for a 60 to 90-day pause on the project, later clarifying that he was “not in favor of going forward with the project.”

In the end, the commission voted to move forward, agreeing to evaluate a number of issues and sharing some concern over the loss of shade trees on the site. “When I saw 102 trees taken down, it was like something was taken out of my gut,” Commissioner Sheila DeCiccio explained. Weaver shared the sentiment saying, “I’m a little disappointed with the lack of shade trees on the site.”

There will be a workshop on May 18 at which library staff will share further input with the city on the future of the project and the exploration of modifications.