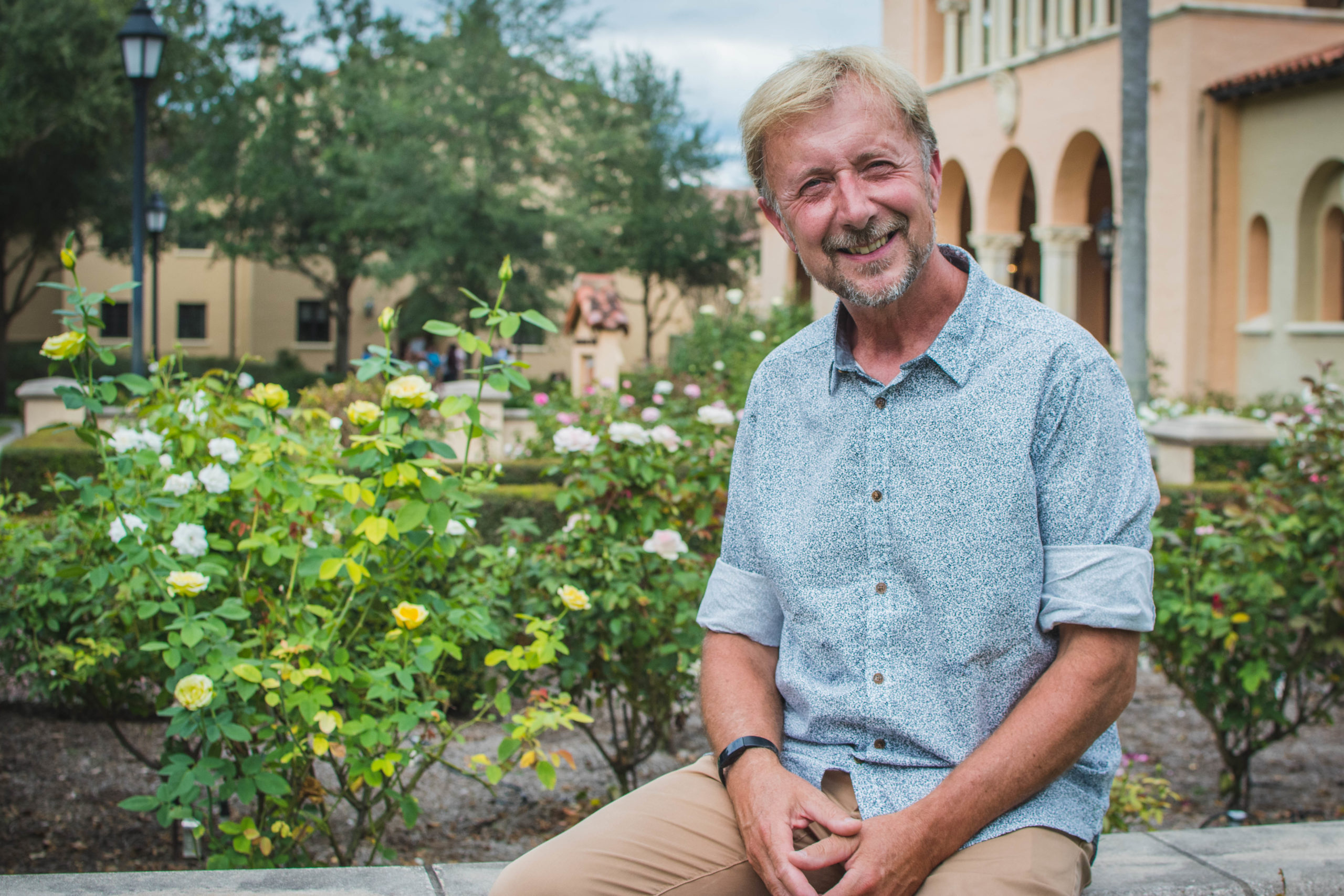 British artist Paul Day was commissioned to create a sculpture of Rollins alum Mister Rogers for the college. The piece will be unveiled later this month. Photo by: Abigail Waters

British artist Paul Day was commissioned to create a sculpture of Rollins alum Mister Rogers for the college. The piece will be unveiled later this month. Photo by: Abigail Waters
Share This:

Following months of research, design, and sculpting, the much-anticipated statue of Rollins College’s beloved alum, Fred Rogers of “Mister Rogers’ Neighborhood,” has been cast in bronze and safely delivered from across the pond. The piece, titled “A Beautiful Day for a Neighbor,” was commissioned and funded by several Rollins trustees and private donors and created by renowned British artist Paul Day.

Last week, Day visited Winter Park to further explore the campus and the city where his work will soon be on display and sat down with the32789 to discuss his process and to what he is most looking forward with respect to the upcoming unveiling.

Day admitted that when he was first approached about this project by Allan Keen, a Rollins alum-turned-trustee who met and befriended Day on a trip abroad to France, he was not familiar with Mister Rogers or his legacy. However, Day’s interest was piqued, and what started as a simple Google search quickly evolved into a several-month-long research project to learn all he could about Mister Rogers and his values.

“I don’t really do statues terribly well. I like to tell stories with my art, so when I was approached to do this statue, I wasn’t exactly enamored with the prospect,” Day said. “But, of course as soon as I hit the search button on Google and saw these pictures of puppets, cardigans, sneakers and funny haircuts from the 1960s I got interested because it was total discovery.”

After watching dozens of “Mister Rogers’ Neighborhood” episodes and making a trip to Pennsylvania to visit the Fred Rogers Center and meet his now late wife, Joanne Rogers, Day was prepared to create a sculpture representative of Mister Rogers’ legacy.

“I felt this interesting sort of connection with Mister Rogers as I began to uncover who he was. And, of course there’s lots of archived material that shows him speaking to children and his manner and the things he said touched me a great deal,” Day said. “You can’t not be impressed with the simplicity, wisdom, soundness of ideas that come out of the lips of Fred Rogers.”

The sculpture, which weighs in at over 3,000 pounds and stands over seven feet tall, features Mister Rogers dressed in his iconic sweater and sneakers with a group of children sitting around him while he holds one of his famous hand puppets, Daniel Striped Tiger. Additional puppet characters from the show are depicted on the back of the sculpture and lyrics from the series’ theme song are carved into the base.

“I was able to present to [Joanne Rogers] my ideas and thinking for the project and she seemed really excited by the fact that it wasn’t going to be a standing statue of Fred,” Day said. “I really wanted to celebrate his work and surround him with children and take the attention away from him and focus more on and celebrate the program because that’s his life’s achievement.”

According to Day, there are two existing statues of Mister Rogers that show him standing alone and, in his opinion, do not truly express who Mister Rogers was.

Day found that the more he worked on the project, the more he drew similarities between his work as an artist and the work Mister Rogers did in his career. “In my own way I am actually a puppeteer myself with my sculptures,” Day said. “I’m imagining characters, I’m imagining places, and I want to tell a story through my sculptures that can amuse and entertain, that can provoke thought; and so Mister Rogers is actually a great subject for a sculptor.”

The project required about three months of part-time research and planning, 10 months of sculpting the figure from clay, and eight months to have molds made and cast the sculpture in bronze. The mold and casting process was complex. To create the final product, a team of four foundrymen traveled to Day’s studio in Burgundy, France to cut the clay piece into 80 separate bits used to make molds, transported the molds back to the foundry in the Czech Republic to create wax copies which were cast in bronze, and welded them together like a giant jigsaw puzzle before shipping the final piece abroad.

Day explained that while he has completed several private American commissions, this is the first piece he will have on display for the public in the U.S. The statue will make its home in a courtyard on Rollins’ campus located directly between the Knowles Memorial Chapel and the Annie Russel Theatre – a perfect location since he was involved in Chapel activities and the Chapel Choir and he also appeared in several productions at the theatre. The space is currently being prepared for the delivery of the statue, which is safely stored nearby.

According to Day, the courtyard location was not initially an option presented when determining the placement of the sculpture on campus. “When I was told that [Rollins President Grant Cornwell] was considering the chapel courtyard, that was a fantastic piece of news to hear because it’s so perfect for this statue,” Day said. “It’s going to be a beautifully relandscaped courtyard.”

When asked how he hopes the sculpture will impact or be interpreted by passersby once unveiled, Day replied: “As an artist, I would hope that it doesn’t leave people indifferent, firstly. And I would like them to be impressed with the quality of the artwork and be sort of stopped in their tracks the first time they see it and admire the composition and whatnot, but beyond that I hope that people who grew up with Fred get taken back a little bit to the days when they switched on the telly and listened to him. I hope they will get a certain sense of nostalgia about that and a sense of joy at seeing those puppet characters brought to life.”

The sculpture will be available for public viewing beginning Friday, October 29 at 10 a.m. and Day will be present at the event to answer questions. The public viewing will include a Mister Rogers Walking Tour for those interested and Daniel Tiger’s Neighborhood cut-out characters will be placed on the lawn for the younger visitors.