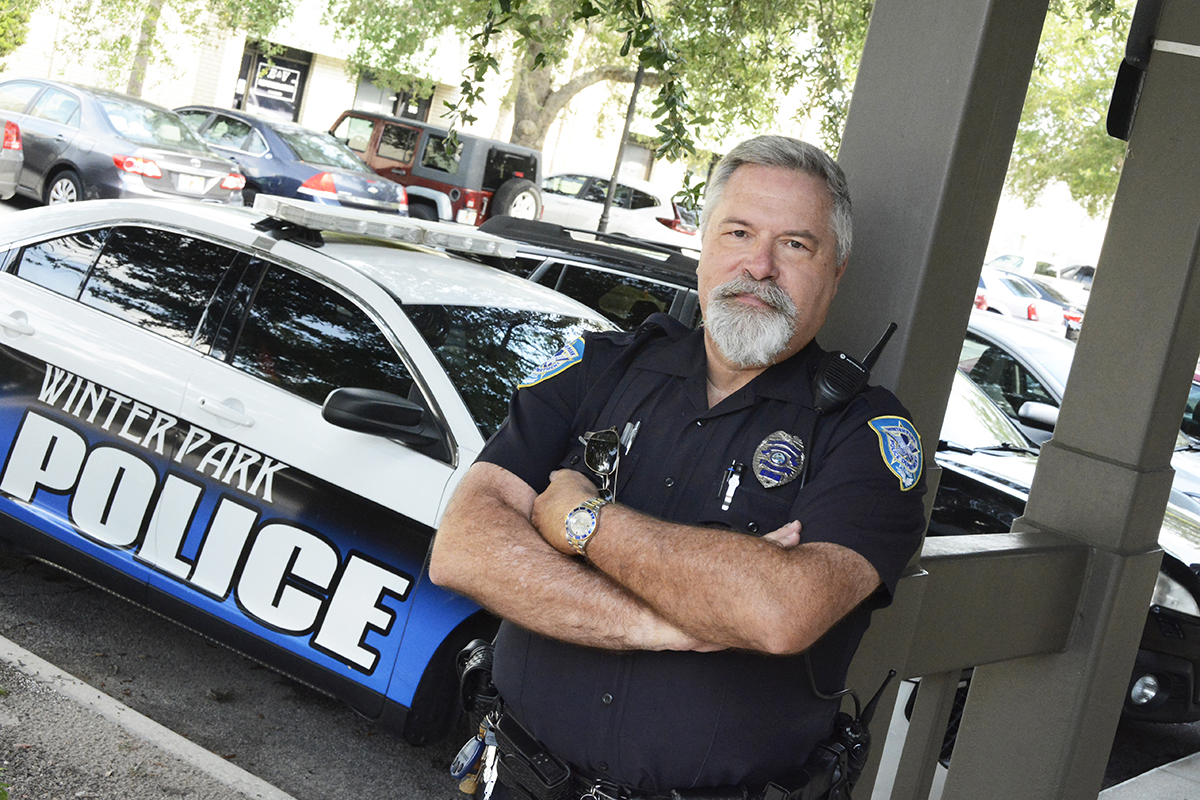 Mark Dawkins’ law enforcement career includes local and state-wide service. He continues to work with the Winter Park Police Department in his retirement. Photo by: Jim Carchidi
Share This:

Mark Dawkins devoted his career to serving and protecting the community. And six years into his retirement, he’s still on patrol.

His 32-years in law enforcement began as a uniform patrol officer with the Winter Park Police Department, but his talents helped open several doors.

Dawkins served as a traffic homicide investigator, firearms instructor, and spent six years working on cases throughout Central Florida with the Drug Enforcement Administration. He kept local waterways safe as a lakes patrol officer, and served as a field training officer where he worked with a young recruit named Timothy Volker, who currently serves as Winter Park Police Chief.

“I’ve always said if the job stopped being fun, I’d quit,” said Dawkins. “Working at the local level, compared to the federal level, you can see the positive effect you have on the residents. That one-on-one contact gives the job a different perspective.”

Dawkins retired from the Winter Park Police Department in 2016 but stayed on as a reserve officer, recently marking his 38th year of service.

“I still love the job, the people I work with and the community I serve,” he said. “But what a difference it makes when you can set your own hours.”

Here, Dawkins discusses his career and why he continues to serve at a time when most people are enjoying retirement.

Why did you choose a career in law enforcement?

How did you get to work for the DEA?

Every new officer begins his or her career in uniform patrol answering calls for service.  It is how you learn the job. I spent my first four years learning how to deal with people who are having the worst day of their lives and how to not bring it home with you. My next seven and a half years were spent conducting vice and narcotics investigations as a member of Winter Park’s Vice Squad. My first year in the unit was spent dealing with local vice/narcotics issues. Apparently, I wrote nice reports and was somewhat of a word smith that my supervisor thought I would fit in well serving on the Drug Enforcement Administration Task Force. I was assigned to fill a vacancy in DEA, located in Altamonte Springs at the time. I soon found myself a duly sworn federal agent. I did the “Miami Vice” thing for six and a half years getting to travel throughout the United States and the Caribbean hunting different bad guys.

Which of your professional achievements is most important to you?

Two come to mind. The first came while I was at the DEA, working a complex money laundering investigation spanning over two years. I was the lead agent, responsible for coordinating our efforts with U.S. Customs, the IRS, FBI, and several local agencies. It involved a two-month wiretap, trash pulls, fixed and mobile surveillance, and an IRS undercover agent. This case was brought to a successful conclusion with the arrest and conviction of all targets as well as significant asset forfeitures.

The second took place at the Winter Park Patrol Division. I personally reviewed and rewrote the standard operating procedures manual to help the Department meet the standards required to become nationally accredited. Our efforts paid off with a certificate of accreditation on the first try.

Which of your personal achievements is most important to you?

The continued love and support of my wife, Andrea, and children, Brandi, Daniel, and Michael. Law enforcement is a demanding profession and can be quite consuming. It is often difficult to strike a balance between a job that you love and the needs of one’s family. The only regret that I have is that I was often gone during my children’s most formative years. While I was busy making the money to support my children, my wife took care of everything else and me too. Today, my children are the CEOs in each of their chosen fields and I am their greatest fan. The best thing of all is, while I will always be their dad, I have become their friend; something more precious than gold.