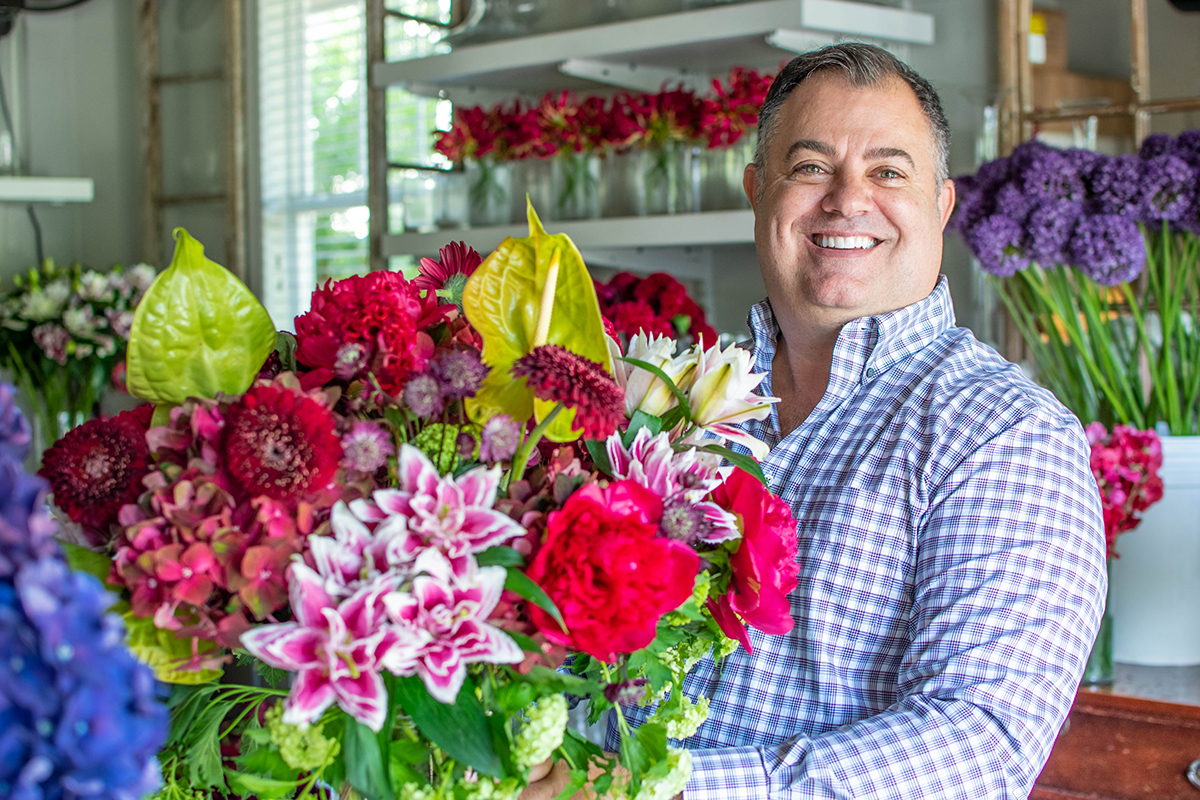 O’Dwyer’s artistic side developed at a young age while growing up in New England. He attended Bristol County Agricultural High School where he had his mind set on gardening and took classes focusing on landscaping and horticulture.

“I worked for an incredible family at Peckham’s Greenhouse in Little Compton (Rhode Island), and I really fell in love with flowers there,” he said. “There was a girl that would do flower arranging and one summer she went on vacation. Somebody asked for an arrangement, and I said, ‘I can do that.’”

This turn of events guided O’Dwyer toward his career as a floral and event designer. He received his associate degree in architecture and interior design from New England Institute of Technology and worked for flower shops in Providence, Boston, and eventually moved to Atlanta. It was there where O’Dwyer met Robert Long, who became his mentor and lifelong friend. The two designed many large-scale projects for celebrities including Elton John and Usher.

O’Dwyer decided to move from Georgia and settled further south in Central Florida, where he took a sabbatical from floral design. O’Dwyer resumed his passion in 2016 and started a self-owned flower and event design business. He currently receives multiple shipments from locations including France, California, Holland. He enjoys receiving a little piece of the world arriving directly at his door.

As the seasons come and go, so do the different varieties. “I really love that part of it when looking at the list of flowers and [I] just light up,” O’Dwyer said. When you see something on the list that hasn’t been on there for a year, you get all excited and then you start seeing the different varieties come through at different parts of the month. And then all of a sudden, they’re gone again until the following year. You catch it when you catch it and then, if not, you look forward to the following year.”

As springtime – his busiest months – comes to an end, O’Dwyer still finds his days filled with planning for his events, which are booked months in advance.

“What makes me so happy is seeing people happy with what we do. Every arrangement is made 100% with a lot of feeling behind it,” said O’Dwyer.

When he’s not designing, O’Dwyer continues to stay busy tending to his backyard and has recently found a love for taking cruise vacations. He also is an advocate for giving back to the community using his talent. He will be donating and designing the flower arrangements for the Pet Alliance of Greater Orlando‘s 30th Annual Furball Gala in November.

O’Dwyer enjoys sharing his talent for events both big and small. The variety allows him to challenge himself as a creator while doing what he loves.

“I’d say my inspiration comes from thinking every week [that] we have all these great projects, then getting inspiration from all the different types of flowers that are out there and the creativity that you can get,” he said. I play off people’s requests and transport any event with the types of flowers that will be used – taking the idea and taking it to the next level.”