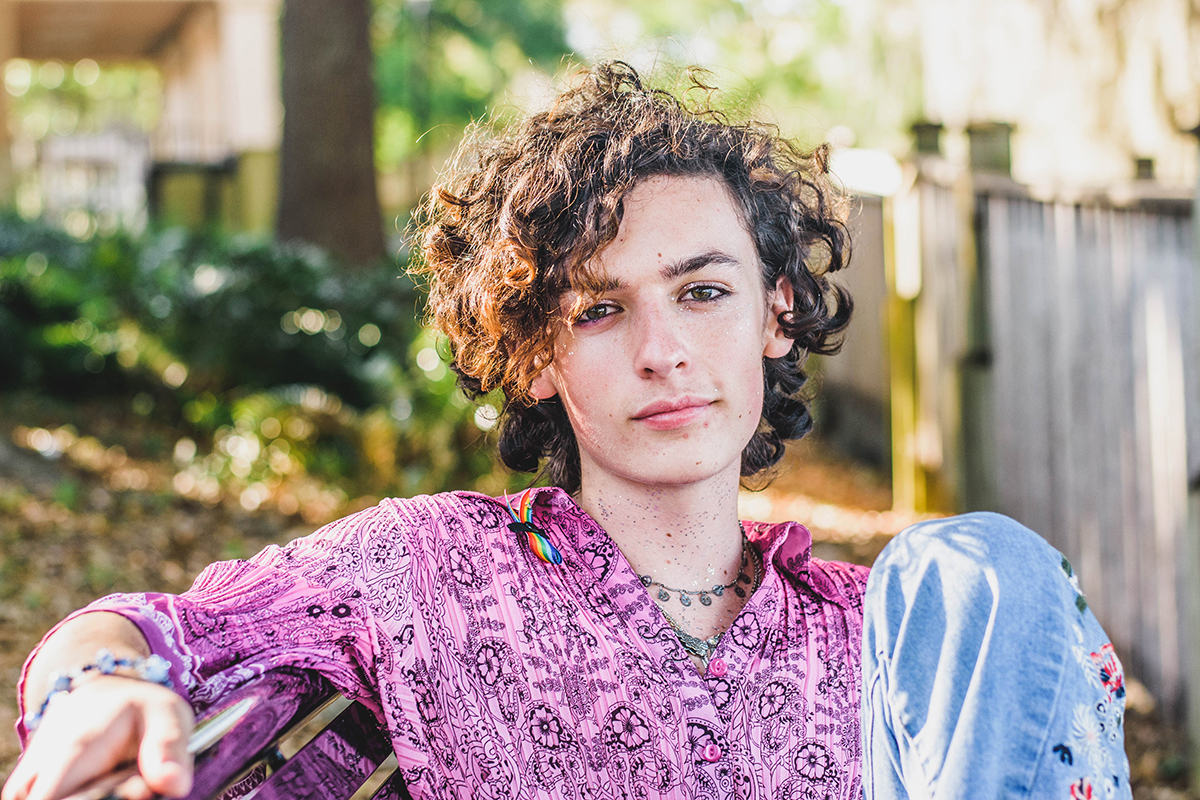 Winter Park High School student Will Larkins cites personal experience as a reason for schools to remain safe spaces for discussions on self-identity. Photos by: Abigail Waters
Share This:

Will Larkins deals with the typical academic requirements of any 17-year-old Winter Park High School student. But appearing before the Florida Senate and writing a guest essay for the New York Times are atypical for any age group.

Larkins – whose pronouns are they, him, and them – identifies as gay and nonbinary but did not understand what it meant until the age of 11, when a friend explained the awkwardness that had previously caused Larkins years of anxiety and depression. “I didn’t know what being queer was. I just thought something was wrong with me.”

They credit their parents and friends for being sources of support and understanding. However, after a series of threatening encounters with classmates that included being harassed at a 2021 Halloween party, it was Larkins’ teachers who provided the encouragement to channel their frustrations into finding solutions.

“It was my third time (during) that school year that something negative happened because of my sexuality and how I present myself,” Larkins said. “There are so many supportive teachers who helped and stood up for me.”

“We have a Gay-Straight Alliance at school, but that’s more of a safe space to gather,” Young said. “QSU evolved as a way to educate and take action to make some positive changes.”

“We had about 25 people in our first meeting,” Larkins said. “I think the most has been about 40 and we have about 500 followers on Instagram.”

Larkins believes that schools need to be a safe space. On Feb. 28, they appeared before the Florida Senate to oppose Florida House Bill 1557, aka, the Parental Rights in Education bill, citing their own experiences and those of friends who have been subject to homophobia and intolerance.

Supporters of House Bill 1557 cite its protection of parents’ rights to access information and maintain involvement in decisions regarding their children’s well-being. Supporters also are in favor of language that states, “classroom instruction by school personnel or third parties on sexual orientation or gender identity may not occur in kindergarten through grade three or in a manner that is not age appropriate or developmentally appropriate for students in accordance with state standards.”

Opponents, who have dubbed it the “Don’t Say Gay” bill, point out the vagueness of the section that reads, “or in a manner that is not age appropriate or developmentally appropriate for students in accordance with state standards,” believing it can result in the banning of necessary discussions with students at all grade levels.

“You’re not going to prevent people from being queer by not teaching about it,” Larkins said. “And parents aren’t trained professionals. I know people who have been kicked out of their house for coming out.”

On March 7, Larkins helped organize the Say Gay Anyway walkout at Winter Park High School. The event, which students were permitted by the school administration to attend, was one among several state and national protests against the bill.

Since the walkout, Larkins has spoken with national and international news outlets, was published in the New York Times, and received words of encouragement from across the globe. But the most encouraging result happened at school.

“It changed the culture,” Larkins said. “It seems like people felt that, by being there, they were now advocates and a lot of people became advocates after the walkout.”

“I think that the perception was changed because it was such a positive event,” Young said. “People felt, all of a sudden, that they were part of something.”

In spite of Gov. Ron DeSantis signing House Bill 1557 into law on March 28, Larkins and their peers plan to continue efforts for change by focusing on voter registration.

“On a national scale, it might feel like your vote feels useless but it’s not,” Larkins said. “Especially at the state level and local elections, you make a real difference.”

Larkins’ message to anyone struggling with self-identity comes from optimism that was learned from experience. “All hope isn’t lost,” they said. “If you ever need a support system, there’s a whole community out there that’s ready to take you in.”