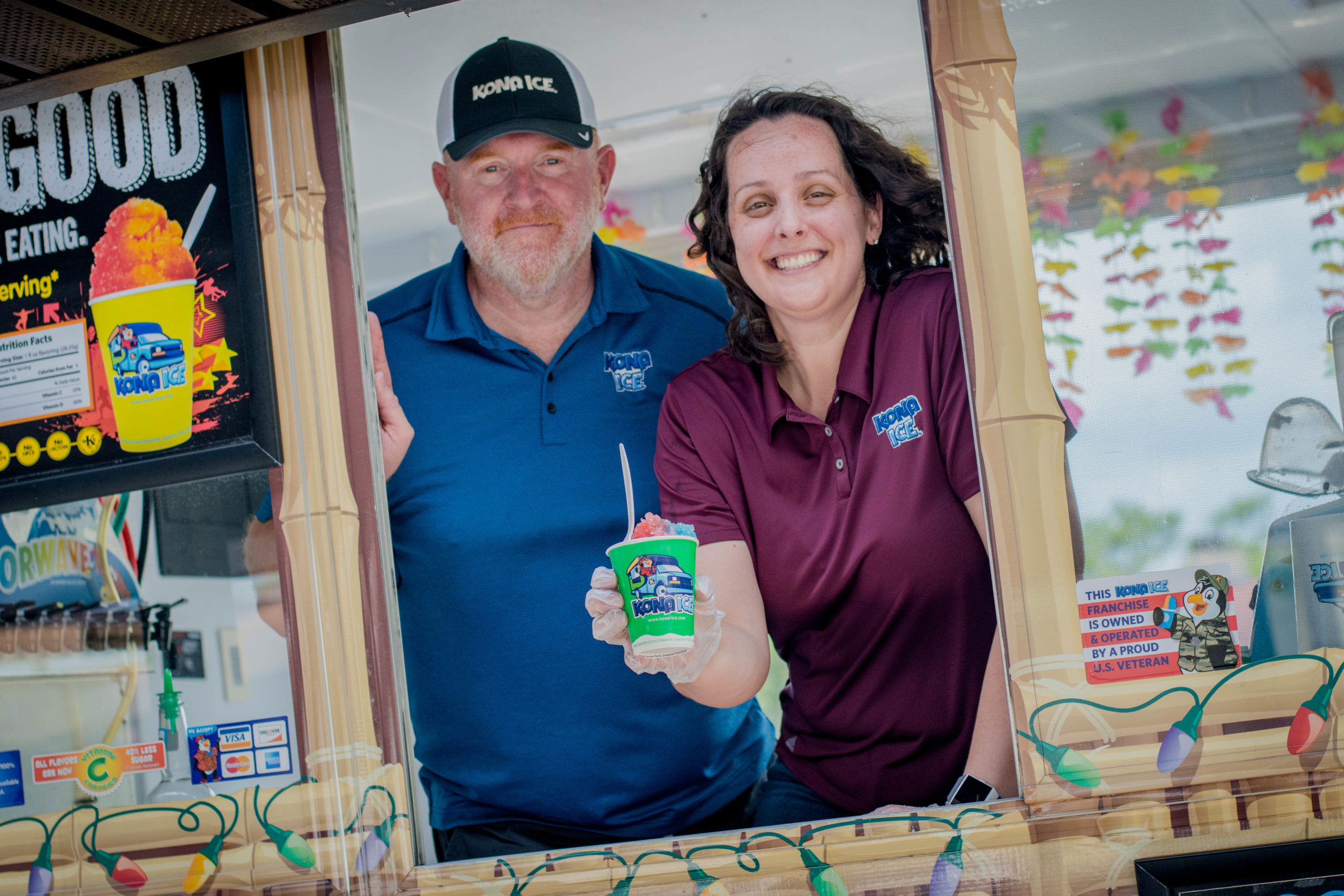 Michael Slagle and Amber Minton pictured in the Kona Ice truck at an event on July 15. Photos by: Abigail Waters
Sponsored By:

Michael Slagle and Amber Minton pictured in the Kona Ice truck at an event on July 15. Photos by: Abigail Waters
Share This:

Michael Slagle is a United States Marine Corps veteran and law enforcement veteran, and although he’s never considered himself an entrepreneur, the challenge of owning his own company has always enticed him.

After recently being furloughed from his job due to COVID-19, Slagle started doing some research on franchisee opportunities. He quickly found Kona Ice, a mobile, Hawaiian-style shaved ice company that offers franchisees the opportunity to own and operate their own shaved ice trucks. After getting buy-in from his partner, Amber Minton, Slagle decided to become a franchisee and operate his Kona Ice truck in Winter Park.

From the beginning, Kona Ice fit the mold that Slagle was seeking. “I loved the environment of Kona Ice,” he said. “When you show up with the truck, everybody is happy. In my background [with the Marines and with law enforcement] … you tend to be around negative energy … I wanted to surround myself with an upbeat, positive energy, and I saw that with Kona Ice.”

Minton, a graduate of Rollins College, feels that her connection to the Winter Park community will be an important part of the business’ success as they partner with organizations around town. Slagle and Minton both believe that Winter Park is an ideal community for their business. More than just a traditional ice cream truck, Kona Ice trucks partner with local organizations in order to give back to the community.

The business focuses largely on fundraising events, offering “Kona Days” at schools, sporting events, birthday parties, or festivals. When a nonprofit partners with Kona Ice, it has the option to keep a percentage of the sales made during the event (typically 20 percent) as a part of Kona Ice’s giveback program. According to Slagle, the company has given back more than $80 million to-date, nationwide.

The truck doesn’t exclusively serve nonprofits, though. For-profit businesses, neighborhood associations, and private parties are also common clients of the truck, although for-profit organizations are not eligible to participate in the giveback program. Organizations interested in partnering with Kona Ice can reach out via email to winterpark@kona-ice.com to schedule an event.

“We really think that this Winter Park area is perfect for the Kona Model,” said Slagle. “[Winter Park] has such a variety of corporations, youth sports, festivals, schools – those are all the areas that are tailor-made for the Kona experience.”

The snow cones served by Kona Ice contain 40 to 60 percent less sugar than a normal snow cone, according to Minton, and certain flavors are infused with vitamins. The product is also Smart Snack Approved, allowing it to be served in schools.

But Kona Ice isn’t just for children. With flavors like Piña Colada, Mai Tai, BlackBerry Mojito and Bahama Mama (all alcohol-free), Kona Ice caters to all ages. “It’s not just [for the kids], it’s an experience for the adults, and the ones who let their guard down love it,” said Minton.

Slagle and Minton opened their truck to the community in June, and so far, they have been feeling the effects of COVID-19.

“We do events and we do gatherings, and those kinds of things are limited right now,” said Slagle.

“Right now, sports would be in full-swing. We would be out at the sports field doing the give-backs for the sports team,” said Minton. “Winter Park doesn’t have sports going on right now.” The fact that the business was launched in the summer has also presented a challenge, as schools in the area are not in session.

Typically, Kona Ice trucks operate by giving customers a cup of shaved ice, and letting the customer apply the syrup themselves on the truck’s “Flavorwave®.” However, due to COVID-19, Kona Ice employees add the flavored syrup to the ice and hand the customer their final purchase to reduce the chance of spreading the virus.

The company has also taken extensive safety precautions to ensure a safe experience for its customers. “[With] the overall caution of people now … and just a fear of the repercussions of the pandemic, Kona [Ice] has done a lot with micro-shielding trucks, keeping surfaces clean, changing out gloves, wearing masks,” said Minton.

Despite the challenges, Minton and Slagle say that they have received positive responses so far. “It’s been phenomenal feedback,” said Minton. “We’ve had people at companies that have booked us for personal things then turned around and booked us for their corporate [events] too.”